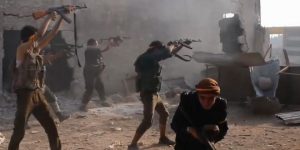 Heavy clashes have erupted between the US-backed Syrian Democratic Forces (SDF) and Islamic State (IS) militants in the eastern Syrian province of Deir Ez-Zzor, like reported by basnews.com.

According to the Russia Today, the fresh confrontations begun on Thursday morning and were ongoing around Hajin town, close to the Iraqi border.

No casualty figures were available.

The Kurdish-led SDF had previously suspended its anti-IS operations at the wake of the Turkish threatening of attacking the Kurdish towns in the border territories. It, however, resumed the assaults with the mediation of the US.