You are here: Home / MidEastGulf / Have the Syrian rebels got anti-aircraft missiles? 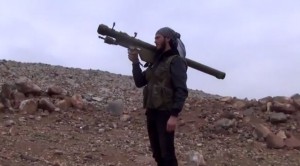 A Syrian regime’s fighter jet was shot down on April 5, near al-Bawabiya village in southern Aleppo where fighting recently broke out between rebel and regime forces.

The Syrian regime’s military said a plane on a reconnaissance mission had been shot down by a surface-to-air missile, according to the Guardian. This is the second time in less than a month that rebel groups shot down a government military plane, allegedly with anti-aircraft missiles.

On March 12, the rebel group Jaysh al-Islam claimed responsibility for downing another fighter jet over Kafr Nabudha, a small town northwest of Hama. Russia’s Ministry of Defense issued a statement on March 12 claiming that the, “Syrian MiG-21 was downed by [a] MANPAD shot near Kafr Nabudah on March 12, 2016 at 2.41 p.m.”

The rebels having surface-to-air missiles would be a major game changer in Syria’s conflict, as it challenges Assad’s air supremacy, which has been his main advantage since the beginning of the conflict.

Fighter jets and helicopters have hit civilian targets such as hospitals, bakeries and residential buildings, according to watch dog organizations, such as is documented in this Human Rights Watch report.

Although rebels have been able to shoot down several aircrafts after capturing anti aircraft guns from regime forces, they are largely helpless when it comes to Assad’s air supremacy.

Therefore, opposition groups have repeatedly asked their backers for anti-aircraft missiles to target Assad’s aircrafts. The United States and Europe have been reluctant to provide anti-aircraft weapons out of fear that such weapons may end up in the hands of extremist groups.

The interview followed regime forces making significant gains against rebel forces in Syria due to increased Russian air and military support. Although this is not the first time that Saudi Arabia indicated its desire to provide rebels with anti-aircraft missiles, the Russian intervention has tipped the balance in Assad’s favor and poses an unprecedented threat of destroying the rebel groups in Syria.

Pro-regime sources reported twice this year the use of anti-aircraft missiles to down government fighting jets, which are the first times during the five year conflict it has made such claims. Russia’s Ministry of Defense reported the first incident less than a month after the Saudi Arabian Foreign Minister’s interview.

Two days later Putin announced the partial withdrawal of Russian forces, which shocked Russia’s allies and rivals. It is a long shot to speculate that Russia’s withdrawal is because opposition supporters provided rebels with anti-aircraft missiles.

However, if the aircraft was indeed downed using surface-to-air missiles then someone might argue that the timing of Russia’s withdrawal could have partly been to de-escalate the tension and stop the rebel backers from supplying their allies with more missiles.

Anti-aircraft missiles could make Russia’s military intervention, which so far has been relatively cost effective for it, costlier financially and in terms of loss of life, and hence also in domestic political capital.

Local news sources also reported that the al Qaeda-affiliated group the Nusra Front transferred the pilot of the jet that was downed on April 5 to Ahrar al-Sham, a powerful Islamist group. The transfer took place after Ahrar al-Sham provided evidence confirming the group’s responsibility for shooting down the plane.

However, it is hard to verify Ahrar al-Sham’s claim that they brought the plane down, “because all the opposition groups own the same anti-aircraft guns, making it extremely difficult to know who is responsible for downing the jet when anti-aircraft guns are used. Furthermore, the jet was completely destroyed and we don’t have experts to analyze the immediate cause of the downing,” says Ahmed, a media activist in Idlib.

Therefore, it is likely that Ahrar al-Sham used something different to the commonly used anti-aircraft guns, otherwise Nusra would have no reason to believe its claim.

It is difficult to assess what the implications of providing rebels with anti-aircraft missiles would be for Russia’s military intervention, since we do not know the exact number of Russian aircraft deployed in Syria, nor the Russian forces’ full military capabilities.

However, the anti-aircraft missiles will pose more of a threat to Assad’s jets than to the Russian ones, because the Russian fighters have significant air-to-air self-defense capabilities and fly at a higher altitude, making them harder to target.

Nevertheless, Moscow may try to deescalate by pushing more for a political solution and use the United States to pressure the rebel backers not to send more anti-aircraft missiles to Syria.

However, if opposition groups start using anti-aircraft missiles to tip the balance against Assad, then there is a possibility that Russia might provide Assad with more sophisticated fighter jets or advise him to depend more on surface-to-surface missiles.

Though still unconfirmed, the increase in the number of reports that suggest that rebel groups have acquired anti-aircraft weapons requires consideration because these weapons will affect the course of the war.

At this point, though, even if some groups have surface-to-air missiles, then it is likely only a small amount, since rebel groups have not used them widely. At this point, then, opposition backers probably see anti-aircraft missiles more as a means to put pressure on Assad to negotiate rather than as a strategy to change the course of the war in favor of the opposition.