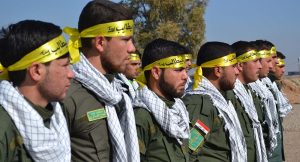 700 Christian families have fled their homes in Nineveh Plain due to the latest shelling of the Iranian-backed militias of Hashd al-Shaabi which wounded two civilians and destroyed properties in their town, like reported by basnews.com.

Lara Yusuf, Mayor of Alqosh, a Christian town in Nineveh Plain, told BasNews that 700 Christian families have arrived in the town after they fled their homes in the nearby town of Telskuf due to the shelling of the Shi’ite militias.

“Christian population were displaced once again due to Hashd al-Shaabi’s activities and threats,” Yusuf said, adding that the displaced civilians are waiting for the situation in their area to be normalized to return home.

These IDPs are in need of urgent assistance as winter is approaching, said the official asserting that “Christians want to live under the protection of Peshmerga.”

After the fall of Kirkuk and other disputed territories to the IRGC-backed Hashd al-Shaabi militia, Iraq’s minorities in the north, who survived the brutality of the Islamic State organization, once again faced a new wave of atrocities at the hands of the Shi’ite militias.

The Center for Genocide Studies of International University of Erbil called on the US to protect the minorities, namely Yezidis, Christians and Kakais, in Nineveh Plains from another genocide and displacement which is likely to come about in the wake of an imminent attack by the Iranian-backed Hashd al-Shaabi militias on Peshmerga-held Fishkhabur region which Iraq is threatening to capture by force.