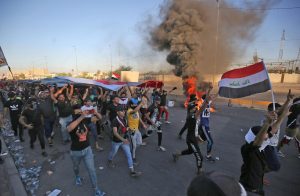 Iraq’s powerful Hashed al-Shaabi (PMU) paramilitary force said it was ready to stop a “coup d’etat or rebellion” against the Iraqi government as anti-corruption protests continue to rock the country, like reported by middleeasteye.net.

Overnight, at least 15 people were killed in a Baghdad suburb during clashes between security forces and protestors, according to the Reuters news agency.

Demonstrations, which began on Tuesday with initial calls for an end to corruption and youth unemployment, have since turned violent and morphed into demands for the removal of the government.

According the the interior ministry, 104 Iraqis have been killed as security forces have cracked down on the protests.

Speaking to reporters on Monday, Faleh al-Fayyadh, who heads the Iranian-backed PMU, said he wished for an “end to corruption, not the fall of the regime”.

“We know who stands behind these protests. The plan to bring down the regime has failed,” Fayyadh told reporters in Baghdad.

The PMU, which played a vital part in the defeat of the Islamic State group in Iraq, is supposedly in the process of regularising its units into the Iraqi army. However, the process is uncertain, with the militias traditionally taking much direction and support from Tehran.

Fayyadh’s statement echoed comments made by Iran’s Supreme Leader Ayotallah Ali Khameini on Monday, in which he accused “enemies” of attempting to drive a wedge between Tehran and Baghdad.

The leaderless protests are the biggest security and political challenge for Prime Minister Adel Abdul Mahdi’s government since it took power a year ago.

In a bid to quell protests, Baghdad has announced a series of reforms to create jobs, boost social welfare and oust corrupt officials.

The Iraqi government has also imposed a blackout by blocking internet access across the country. Local media outlets say their offices have been raided.

Live ammunition against protestors
Abdul Mahdi on Saturday denied claims that his forces had shot live ammunition directly at protestors and said its use of force was during “strict” instances of self-defence.

The interior ministry said that 6,107 protestors had been wounded during protests in Baghdad and across the south of the country.

Iraq is ranked as the world’s 12th most corrupt country, according to Transparency International’s Corruption Perceptions Index.

According to official figures, since 2004 almost $450bn of public funds have vanished into the pockets of politicians and businessmen.

In addition, youth unemployment in Iraq is running at around 25 percent, according to the World Bank, in a country where the vast majority of the population is under 30.