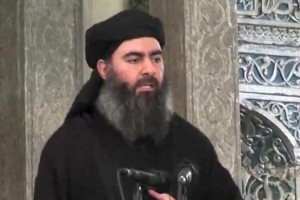 He is said to be mentally alert and able to issue orders, but his physical injuries are now prompting the so-called Islamic State’s governing Shura Council to make a final decision on a temporary stand-in leader who can move back and forth between front-lines in Syria and Iraq and is able to handle day-to-day leadership in the self-declared caliphate.

That leader will be, in effect, under al-Baghdadi, a super deputy to the caliph — in Arabic, na’ib al-malik, or viceroy. According to Islamic State defectors debriefed by opposition activists in neighboring Turkey, the election will pit two Iraqis and a Syrian against each other — all well-known figures within the terror army’s top leadership.

These sources say nine doctors to treat the infirm al-Baghdadi were also taken to Raqqa, including a senior physician from Mosul’s general hospital, but the entire al-Baghdadi caravan of attending medics, aides and body guards was split into separate convoys to avoid attracting attention from U.S. satellite surveillance and inviting a coalition airstrike or drone attack. At least one doctor didn’t know who his patient was when he arrived in Raqqa and was ordered brusquely to stop asking questions about the man’s identity.

The doctors initially were put in a military barracks in Raqqa’s Al-Mishlab neighborhood close by the city’s industrial district but were subsequently divided into the three groups and billeted in different houses. By having al-Baghdadi in Raqqa, the Islamic State (widely known as ISIS) will be able to secure drugs, equipment or additional medical expertise needed from nearby Turkey.

Britain’s Guardian newspaper first reported last month that al-Baghdadi had been injured in a March coalition airstrike, citing a Western diplomat and an adviser to the Iraqi government, and the BBC quoted a spokesman of Iraq’s interior minister as saying the ISIS caliph had been seriously wounded in an airstrike believed to have taken place on March 18. The Iraqi official, though, gave no details about which country carried out the raid, saying only it was coalition warplanes.

U.S. defense officials have said since the Guardian report that they have no knowledge of al-Baghdadi’s fate and some said they were unaware of an airstrike on March 18. Pentagon spokesman Col. Steve Warren told The Daily Beast: “We have no reason to believe it was Baghdadi.” But Iraqi government adviser Hisham al-Hashimi told the British newspaper that al-Baghdadi was “wounded in al-Baaj near the village of Umm al-Rous on 18 March with a group that was with him” in a three-car convoy. The strike aircraft was most likely a drone.

Without more confirmation and details, compounded with al-Baghdadi’s general invisibility and U.S. caution, rumors have multiplied, and so has skepticism. Last November there were reports in Arab and Western media that al-Baghdadi had been injured but they turned out to be inaccurate.

And last week Radio Iran reported al-Baghdadi died from the March airstrike, saying ISIS members had already sworn loyalty to a former physics teacher, Abu Ala al-Afri, as his replacement, although there has been no evidence of this on jihadist social media sites and Twitter feeds.

Interestingly, last week the United States posted al-Afri, under the name Abd al-Rahman Mustafa al-Qaduli, on a fresh list of al Qaeda and ISIS figures with multi-million-dollar bounties on their heads. His was put at $7 million; al-Baghdadi (Abu Du’a) is at $10 million.

According to ISIS defectors, including a senior security official in Raqqa and a bodyguard to one of the group’s top leaders, al-Baghdadi is alive, even if he’s not kicking. They say he was seriously injured in March with wounds that could have been life threatening if left untreated. The defectors say he was moved because top commanders decided he would be safer in Raqqa than Mosul, where an Iraqi offensive with Kurdish support is expected to start later this summer to recapture Iraq’s second largest city.

The defectors were debriefed by Ahmad Abdulkader, who recently launched a network of activists called “Eye-On-The-Homeland.”  He told The Daily Beast at the weekend that other would-be defectors have confirmed the claims of the security defectors, one of whom goes by the nom de guerre Abu Mohammed and was tasked by ISIS with hunting down activists in Raqqa.

The Daily Beast has not talked directly with the defectors, who are reluctant to meet Western reporters while Eye-on-The-Homeland is negotiating their fate with Turkish authorities. Abdulkader displayed passports of defectors, debriefing notes and Islamic State ID cards. Turkish officials confirm he is an important conduit for defectors from the self-styled caliphate. Abdulkader says in the past month his activists inside Raqqa have helped about one hundred fighters to defect.

“Most are Syrians but a dozen are foreigners,” he says. They include a French man, a French woman and a Moroccan. He waves the Moroccan’s passport at me in his small office in the heart of Urfa, the Turkish border city that many foreign recruits have passed through on their way to join the Islamic State. He says there has been a dramatic decrease in foreign recruits to the Islamic State, basing the claim on reports coming to him from those who have already defected and would-be defectors still in the caliphate.

“There used to be each week 100 to 200 foreign recruits arriving in Raqqa; now there are five or six every week,” he says. He suspects one of the reasons for that is, “The foreigners inside are communicating to their friends back home not to come and they’re explaining the reality of what life is really like inside.” If so, that would contrast with their public Twitter and Facebook postings extolling the virtues of the caliphate — postings followed by the terror army’s propagandists housed in four buildings in Raqqa’s al-Rawdah neighborhood just outside the old city.

The defectors say media reports that Abu Ala al-Afri has already been appointed viceroy are inaccurate, claiming that the Shura Council, a religious governing body of about nine senior ISIS leaders, is due to vote this week on who will become na’ib al-malik. The Shura Council is thought to be dominated by Iraqis.

In addition to Abu Ala al-Afri, who is one of the nominees, there is a second Iraqi contender for the slot — Abu Ali al-Anbari, a Mosul native and former major general in the Iraqi army who has been in charge of overseeing Islamic State territory in Syria.

Like al-Afri he rose through the ranks of al Qaeda in Iraq but had been previously thrown out of another extremist Sunni group, Ansar al-Islam, for financial corruption. A clever military tactician he has no religious training and little juridical background in Sharia law. The third nominee is a Syrian, the current Islamic State governor of Raqqa – Abu Luqman, whose real name is Ali Moussa al-Hawikh. He was one of dozens of Syrian jihadists released from jail by President Bashar al-Assad in the summer of 2011 as the rebellion against the Syrian regime was starting.

Al-Afri, who is said to be more charismatic than the other two nominees, remains the most likely to win the full backing of the Shura Council, but he is outranked by al-Anbari. Handing the slot to the Syrian contender may not sit well with the Iraqis who dominate the upper reaches of ISIS, but boosting the power of Abu Luqman could be smart politics with signs mounting of disgruntlement among the terror army’s Syrian fighters, who are said to be unhappy with the pressure on them to volunteer to fight in Iraq.

In a statement issued on April 27 by al-Baghdadi, which appeared on jihadist forums, the ISIS leader requested emirs and fighters in the Syrian provinces to volunteer to serve in Iraq. In the announcement al-Baghdadi appears specifically to call for those willing to be suicide bombers-fighters, asking for “religiously dedicated, patient ones, and war experts who don’t look back, fight and don’t lay down their weapons until they get killed or God grants them victory.”

Two analysts at the Combating Terrorism Center at the United States Military Academy at West Point, Daniel Milton and Muhammad al-Ubaydi, noted that that statement was curiously worded, with the so-called Caliph Ibrahim (al-Baghdadi) requesting rather than instructing. Presumably he has the authority to order people who have already joined the military side of ISIS to mobilize and deploy. “It is possible,” they argued, “that he is concerned about undermining his own leadership by giving an order that may not be obeyed by emirs and fighters in Syria.”

Recently there has been a surge of Islamic State recruitment propaganda videos showing fighters pledging themselves to defend territory the group seized in Iraq last summer after a lightning offensive. In Raqqa political activists opposed to ISIS say there is considerable pressure now being placed on the local population to put people forward for enlistment.

“They need soldiers to go to Iraq,” say an activist with the opposition network named Raqqa is Being Slaughtered Silently. “They are using all the means they can to persuade people to join — from money offers to threats, and prisoners are being press-ganged.”

Abdulkader agrees, saying morale began to plummet after the Islamic State’s failure to capture the mainly Kurdish town of Kobani following a months-long siege and a high death toll among fighters. And morale problems have mounted with the loss of Tikrit. “Disgruntlement has increased with the shifting of the group’s Syrian fighters to front-lines in Iraq,” says Abdulkader.