You are here: Home / Senza categoria / Happily married to Islamic State? No, that’s why it doesn’t work 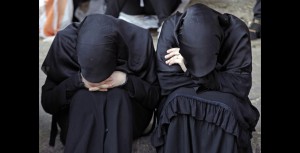 Biased media outlets have woven many a fabricated story about marriage to foreign fighters. In fact, some morally bereft outlets have even branded Syrian society as being tolerant of prostitution by inventing fanciful stories about so-called ‘jihad al-nikah’ or ‘sex jihad.’ Indeed, marriage of foreign fighters to Syrian women has been taking place since the early stages of the conflict in Syria; however, it has been regulated by legal principles and social customs.

Marriage of foreign fighters to Syrian women began early on before the occurrence of any clashes between rebel groups and ISIS, when rebels saw foreign fighters as allies of the revolution. “It is natural that unmarried foreign fighters would want to find wives after having been in Syria for a long time,” says Salim, a 40-year-old man from the town of Al-Bab. As for the number of marriages performed, it has varied from one area to the next. For example, families in Tel Rifaat (which ISIS left at an early stage) and Al-Bab allowed the marriage of their daughters to foreign fighters, while other areas were less accepting of the practice. In spite of their reputation as being conservative in nature, more than 100 women from the two towns married foreign fighters. According to Salim, “this is the clearest sign that the stories circulated about jihad al-nikah are devoid of truth. The families that married off their daughters are known for being conservative and vigilantly protecting their honor.”

Although the rate at which marriages were taking place decreased after infighting between the rebels and ISIS in early 2014, it soon bounced back when the group seized vast stretches of territory and the new areas under its control stabilized. However, the circumstances in which a marriage would take place had changed. Most marriages that took place were now carried out between people who supported the group and subscribed to its creed. These were people with a deeply-ingrained belief that their state would remain and expand. “One of my relatives in the area to the south of the town married off two of his daughters to foreigners fighting with ISIS,” says Ziad, a university student from Manbij. “He also has three sons who fight with the group. One of them was killed in the recent fighting in Ayn al-Arab.” These families have strong links with ISIS and will leave with the group if it withdraws. For this reason they do not hesitate to marry off their daughters.

Poverty is a second factor, especially among poor families, as the lack of means in what was already a poor society has increased. Poverty is the defining characteristic of the inhabitants in the territory ISIS has captured, especially in rural areas. The number of widows in many Syrian communities has also risen, and many of them have no one to support them and their children. This situation worsened when the group shut down all the organizations and charities providing humanitarian aid to impoverished families. This explains the choice made by Amina, who was displaced from her home in Aleppo and now lives in a rural area southeast of Manbij where she has married a member of ISIS. In the words of her friend Aisha:

“Harsh conditions forced Amina—who has seen 20 springs—to accept marriage to a Saudi man who fights with ISIS, after he repeatedly asked her family to let him marry her. They had no one to support them, and after the group banned aid provided by international organizations they became even poorer. Her marriage delivered her family from abject poverty. We don’t have aspirations any more. We suffer just to go on living.”

In every society there are opportunists who like to stay close to whatever authority the prevalent conditions produce. They love the glimmer of gold and the magic of money, and many foreign fighters have both in good supply. Al-Bab resident Abu Ahmad married off his 17-year-old daughter to a fighter from Libya for a dowry of 3 million Syrian pounds. “Many people sell their daughters for financial gain,” says Suleiman, a university student from rural Aleppo. “Abu Ahmad is not the only one.”

Many factors have helped facilitate the marriage of Syrian women to foreign fighters, and the firm belief that ISIS will not be toppled is one of them. This has led to the resurgence of many customs that were only marginal in Syrian society. One of such custom is the practice of early marriage, which witnessed a revival when the group closed schools and forbade girls from going to regime-controlled areas to complete their studies. “Now many girls’ greatest aspiration is to establish a family,” says university student Ghada. “There is no longer any future or aspirations that can be realized in light of the way things are going.” This has been increased by the fact that many young men are not marrying due to poor economic conditions and emigration or plans to emigrate. Early marriage has also led to a rise in the number of older women who do not marry and a decline in widows remarrying.

In addition to all of the above, there is the group’s policy of encouraging marriage in general. This applies to marriage of foreign fighters especially, and its goal is to integrate them into society through the establishment of family ties. As well as vocally encouraging the practice, ISIS has supported it materially by covering all dowry and marriage expenses. Furnished houses are provided and a sum is paid for every wife a fighter marries and each of her children.

Still, marriage to foreign fighters has not proven to be a rosy existence for many. In most cases, reality clashes with dreams of comfort and many problems come to the surface—although they may not be seen as such by ISIS members. One prominent issue is the false names used by most foreign fighters, who conceal their real identities and the precise details of their lives outside Syria. Naturally, this leads to mistrust between husband and wife.

Another prominent issue is the likelihood of the husband’s death, due to the many battles ISIS launches and frontline participation by foreign fighters. “Khawla is a beautiful university student from rural Aleppo whose father works in the Gulf,” says Khawla’s friend Mais. “Her father wanted to marry her to one of his relatives but it didn’t work out—everyone wants to marry off their daughters these days. His cousins left when ISIS arrived in rural Aleppo as they were members of the Free Syrian Army.”

Before long, an ISIS member proposed to Khawla. She had a religious upbringing and had worn clothes similar to the clothes prescribed by the group before its arrival. Her father insisted she marry and after the matter was discussed with him she was went to live with the ISIS member, who was a Tunisian national, in exchange for a dowry of 350,000 Syrian pounds. Her uncles tried to stop her but they were unable to change anything.

Mais says she was surprised by how fast Khawla took on the group’s ideas. When one of her maternal cousins called from Turkey and asked her whether she owned her house of whether she was renting it, she replied: “We own the house; it used to belong to an apostate, and was given to us by the Caliphate state.” Her reply came as a shock to her cousin and her relatives, who were apostates as far as Khawla was concerned.

“She was married six months ago but it seems that her husband feels no emotional attachment to her. He went to fight in Deir Ezzor, and when she asked him not to risk his life he told her: ‘those are not the morals of virtuous Muslim woman.’”

“When she asked him what she should do if he was killed he told her: ‘marry one of the brothers. I only wish not to die before you bear me a child.’”

Mais says that since that day her friend has become another person. Before, she was full of energy and optimism, and now, during their rare meetings, she seems lost. She bites her fingernails and has become a harsh person. “In one of my visits I noticed she had a packet of contraceptive pills. ‘I used to dream of having children,’ she told me. ‘Now I don’t want to have children as they would probably become orphans. My husband is on fronts where the fighting won’t stop and he might well leave Syria. If ISIS goes, no one will marry me because I was married to one of its members, and I certainly won’t be able to emigrate.’”

Yet another prominent issue is the constant fear of what will happen in the future. The wife of a foreign fighter is constantly worried about her husband’s past and his future. He might return to his home country, his former family might arrive in Syria, or he might die fighting.

Notably, most married foreign fighters are from the Gulf. Rather than the financial means that are often at their disposal, this is usually because of the comparative similarity of Syrian and Gulf dialects, as well as shared customs and traditions. In fact, people from Syria and Gulf states often share family ties. According to a teacher from the Aleppo area, “most fighters from the Gulf are members of tribes that extend into Syria. In fact, most of the areas controlled by ISIS are tribal areas. The customs, traditions and character are shared.” Tunisians rank second, due to the large number of them fighting in Syria, where marriage of foreigners has never been common.

It has become clear that marriage of foreign fighters is something that really happens, and that it takes place in the ordinary context of marriage. Contrary to accounts circulated by anti-revolution media, the process is carried out according to set regulations. For the most part, the couples involved believe in nothing but their future state. They do not care about citizenship of any accepted state, for them or their children, as they have become citizens of the Islamic Caliphate.