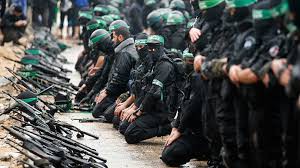 A group calling itself Supporters of the Islamic State in Jerusalem has continued to challenge the Gaza-ruling Palestinian entity Hamas. The ISIS-linked Salafists are attempting to stir enough discontent in the Palestinian territory to pose a challenge to the rival jihadi outfit.

The pro-ISIS group has even delivered rhetorical assaults against Hamas, going on social media to blast the Muslim Brotherhood-aligned faction as worse than the “Jewish Occupier” (Israel).

Hamas has attempted to crack down on uprisings within Gaza. Recently, Hamas militants demolished a mosque that was a known ISIS hotspot. “Armed men from Hamas came to Deir Al-Balah and destroyed the mosque, acting in a way that even the Jewish occupiers and the Americans have not acted,” said a Twitter post from the Gaza-based pro-ISIS group.

Separately, a bomb exploded outside of Hamas headquarters in Gaza on Monday, according to eyewitnesses, who said that the blast did damage to one of the militant group’s security walls.

Hours before the bombing, the pro-ISIS, rival fundamentalist group posted online that they were going to “act against chosen targets” if their allied prisoners were not released in the next 72 hours, AFP reports.

“Hamas and its security forces have 72 hours (until Thursday) from the release of this statement to free all Salafist prisoners,” said the social media post from the Supporters of the Islamic State in Jerusalem. “Our socials are ready to act against chosen targets at the end of this ultimatum. … If they (Hamas) decline, all options are open to respond.”

The bomb did not result in any casualties in the northwestern Gaza Hamas headquarters. Hamas has not publicly commented on the incident.

On Tuesday, Hamas launched a large-scale crackdown on the pro-ISIS groups in Gaza, arresting dozens of suspicious individuals and setting up military checkpoints throughout neighborhoods with the group’s influences, the AP reports.

Hamas has deployed masked militants throughout the fundamentalist neighborhoods in central and south Gaza, hoping to dissuade rival jihadis from conducting any further attacks. A spokesman for Hamas told the AP that “slight violations take place from time to time and the security services follow them.”