You are here: Home / Mediterranean / Hamas, when terrorists are ‘victims’ and terrorism is ‘resistance’ 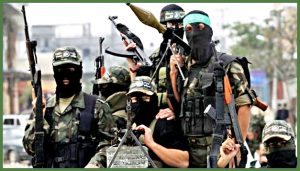 “One man’s terrorist is another man’s freedom fighter” is one of the worst clichés in the English language. Unfortunately the phrase’s logic is applied all too often to the ongoing violence at the Israel-Gaza Strip border, like reported by freebeacon.com.

Just look at Peter Beinart’s recent column on the riots there. “Why are thousands of Palestinians risking their lives by running toward the Israeli snipers who guard the fence that encloses Gaza?” asks Beinart. “Because Gaza is becoming uninhabitable.” And why is the Strip becoming uninhabitable? Because Israel is “denying Gaza’s people the water, electricity, education, and food they need to live decent lives.”

According to Beinart, the ongoing attempts to damage and breach the border security fence to attack Israel, the rocks and firebombs hurled and shots fired at Israeli soldiers, the firebomb-bearing kitesthat torment Israeli farmers trying to grow crops, the widespread presence of swastikas at the demonstrations, the anti-Semitic threats against Jews, the horrible ecological effects caused by burning tires to blind Israeli border guards—all actions carried out by Gazans—are reactions of victims motivated by resistance against their oppressors. The fact that most of the rioters who Israelis have killed were terrorist operatives, or individuals affiliated with terrorist organizations, is irrelevant, because it gets in the way of this narrative.

“Hamas is indeed a brutal and destructive force, to both Israelis and Palestinians,” acknowledges Beinart. “But Hamas did not force Israel to adopt the policies that have devastated Gaza. Those policies represent a choice—a choice that has not only failed to dislodge Hamas, but has also created the very conditions in which extremism thrives.”

This argument is so inaccurate—yet so commonly found in Western media—that it requires a response. One simply needs to look at recent “protests” to see who is really devastating the lives of Palestinians in Gaza, who suffer under the cruel and incompetent rule of Hamas, an Islamist terrorist group that seeks Israel’s destruction.

Last week, dozens of Palestinian demonstrators broke into, ravaged, and looted the Gaza side of the Kerem Shalom border crossing between Israel and the Strip. Kerem Shalom is the main entry point for merchandise and humanitarian aid entering Gaza. “It’s difficult to think of a place more critical to the Strip’s own economy,” writes Israeli journalist Avi Issacharoff. Yet Palestinian rioters caused millions in damage to infrastructure there, mainly by setting fire to the gas pipelines that supply fuel to Gaza. The Israeli military says Hamas backed the destruction. Some reports offer a slightly different take, suggesting a mob spontaneously attacked the crossing and, after the rioting began, Hamas allowed the demonstrators to do as they wished. Either way, Hamas endorsed efforts to sabotage Gaza’s only means of receiving goods and aid as the Strip’s economy crumbles.

So Hamas and its sympathizers blame Israel for Gaza’s fuel shortage, and then set ablaze their means of getting fuel. Yet Beinart accuses Jerusalem of denying Gazans their basic needs.

To be clear, Israel facilitates the transfer of significant quantities of aid into Gaza. Hundreds of truckloads of merchandise enter through the Kerem Shalom crossing each day. Just last week, tens of thousands of pounds of food, gas, fuel tanks, cargo, building materials, and humanitarian aid entered Gaza from Israel, according to the Israel Defense Force’s spokesman. The Jewish state also provides water and electricity to Gaza. It may not provide education, but that is the sole responsibility of Gaza’s governing body, which cares more about teaching anti-Semitism than how to think critically.

Israeli leaders recognize that it is in their interest to improve living conditions in Gaza, if for no other reason than to prevent another war with Hamas. The question is how to do that. Hamas won’t help; using Gazans as human shields and working to terrorize the Jewish state are counterproductive in this regard. Still, as Issacharoff notes, Hamas wants the economic and humanitarian situation in Gaza to stabilize and to avoid a war with Israel. Perhaps the Kerem Shalom riots were meant to signal that, without the former, conflict is on the horizon. They also show how enraged Gazans are at Israel andthe Palestinian Authority, which maintains control of the crossing.

Often lost in the coverage of Gaza is that President Mahmoud Abbas’ Palestinian Authority is far more responsible for the deteriorating situation there than Israel. Most press reports barely, if at all, mention the PA’s role, and Beinart only references it in passing. But Abbas—whose leadership Gazans don’t acknowledge—seems intent on making living conditions in Gaza so terrible to the point of triggering an Israel-Hamas war. The Palestinian government has imposed economic sanctions on Hamas and is considering even further sanctions on Gaza. “Already teetering on the edge of humanitarian collapse, additional sanctions could push the Strip over the edge, leading inevitably to more instability,” writesanalyst Ghaith al-Omari. Abbas has also cut salaries for staff in Gaza and, last year, requested that Israel cut the electricity supply to Gaza. The majority of Gaza’s electricity is imported from Israel but paid for by the PA, which grew tired of financing the Strip’s power.

Israel, in contrast, only prevents items from entering Gaza that could be used as a military threat, and Jerusalem only imposed a blockade when Hamas smuggled weapons into the Strip to fire at the Jewish state, including thousands of rockets.

Unfortunately Western media outlets paint a picture of Gaza similar to that of Beinart. The New York Times, for example, recently published a sympathetic profile of Saber al-Gerim, a 22-year-old Gaza protester, who, the paper was sure to note, “has a modish haircut and carries a few extra pounds from too many months without work.” The article describes a young man who—despite screaming “Allahu Akbar,” throwing stones, and trying to tear down the border fence—is just “a protagonist in nobody’s drama but his own,” someone who dreams of “going home to a patch of land he has never seen and cannot really visualize,” a Palestinian who is “stoic” and “enterprising” but “ill-starred.”

Similar profiles of “hopeless” Gazans lashing out are common in prominent publications. Curiously, it’s quite difficult to find a comparable profile of an Israeli caught up in the chaos—maybe an innocent farmer unable to harvest his crops near the border because they’re set ablaze by people like Gerim, or a soldier protecting her country from rioters seeking to break down the security fence. Are their concerns not important?

According to New York magazine, they’re not. “This month, Israeli snipers shot hundreds of Palestinian protesters—including one journalist wearing a vest marked ‘PRESS’—who posed no life-threatening danger to them, or to the people they’re meant to protect,” writes Eric Levitz. Apparently Levitz and New York don’t realize that attempting to breach the Israeli border to destroy infrastructure and harm citizens is a threat to Israel. The article also makes no distinction between rubber and actual bullets.

The media blame Gaza’s jaw-dropping unemployment rate on the blockade imposed by Israel and Egypt, rather than Hamas’ rule and a society fueled by hatred. They also get basic facts wrong. Take another recent Times story, in which the paper reported that the Gaza fence is “electrified.” How would demonstrators be able to climb an electrified fence without special equipment? This isn’t Jurassic Park. The barrier has electronic sensors to detect infiltrators, as the Times clarified in a correction several days after the article was published.

Western media distort facts on the ground and create a clear picture of Israeli oppression and Palestinian victimhood. In this situation, Hamas and sympathetic Gazans are justified to use violence. Throwing Molotov cocktails or trying to breach the security fence to “take back” Israel are understandable actions, according to this logic. After all, one man’s terrorist is another man’s freedom fighter.