Hamas security forces have uncovered a rocket workshop run by a pro-Islamic State organization in Gaza, according to a jihadist in the coastal enclave, like reported by breitbart.com 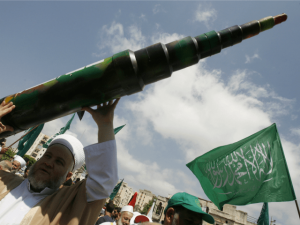 Abu Baker Almaqdesi, a top Palestinian jihadi who previously fought for IS in Syria and Iraq and returned to his native Gaza following an injury, said that hundreds of rockets and explosive belts have been seized by Hamas in a recent raid.

“The range of some of these rockets is 140 kilometers,” Almaqdesi claimed without providing any evidence.  He claimed that similar rockets have already been shipped to Waliyat Sinai, IS’ Egyptian affiliate.

A Hamas Interior Ministry official declined to confirm or deny the report about the rocket workshop, but confirmed that electronic devices allegedly utilized to connect between Sinai-based jihadists and their Gaza counterparts have been seized.

On Saturday, two rockets were fired from Gaza into southern Israel, prompting the Israel Defense Forces to retaliate against Hamas positions.

“Several people, including two children were killed and injured on Thursday in Israeli raids on outposts in Rafah and Sheikh Zwaid in the north of Sinai,” the report said.