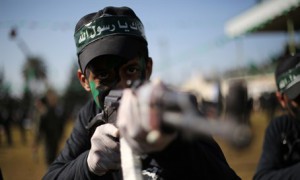 A Hamas terror cell operating out of eastern Jerusalem was planning a mass casualty terror attack in the capital, which incuded assassinating Prime Minister Binyamin Netanyahu.

According to indictments filed last month against the cell, the terrorists planned to assassinate Prime Minister Binyamin Netanyahu as part of a huge terror attack in Israel’s capital.

The cell planned to strike while Netanyahu was visiting either the Great Synagogue of Jerusalem, or the Payis Arena, according to the Walla! News Hebrew-language news site.

The gang had reportedly secured a safe house in Abu Dis, just east of Jerusalem, and set up an explosives laboratory to prepare the large mass of explosives necessary for the attack.

The five-man cell was led by Ahmed Azzam, a resident of Yassuf who had relocated to Abu Dis. The group’s operations were supported and directed by Hamas members in the Gaza Strip.