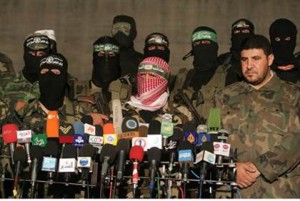 Mere minutes after the rocket attack Wednesday night that was claimed by a Salafist group in Gaza affiliated with Islamic State (ISIS), Hamas rushed to tell Israel it was not behind the attack and that the ISIS affiliate was trying to cause conflict between the terrorist group and Israel.

As Hamas terrorists on Wednesday rushed to clear out of terror sites fearing the IDF retaliation that was quickly forthcoming in the wake of the rocket strike, a senior Hamas source sent a message to Israel via Egypt, reports Maariv.

In the message, the Hamas source said an ISIS affiliate in Gaza that is in a state of conflict with his group intentionally fired the rocket to cause Israel to strike back at Hamas and escalate the situation.

The “Sheikh Amar Hadid Brigades” which claimed the rocket attack said in a statement on Thursday that the strike was in revenge for “the death of an Islamic State member in Gaza by Hamas members.”

The statement apparently refers to a Salafist leader affiliated with ISIS who on Tuesday was shot dead by Hamas forces in Gaza City as they tried to arrest him and he allegedly opened fire on them.

Defense Minister Moshe Ya’alon (Likud) responded to the message on Thursday, saying, “even if those firing on Israeli territory are gangs of rebels from global jihad organizations interested in challenging Hamas by firing at us, we view Hamas as responsible for the goings-on in the (Gaza) Strip, and we won’t tolerate attempts to harm our citizens.”

“Tonight the IDF responded with strikes to the (rocket) fire. And if needed – we will strike even harder, and last summer proved that,” warned Ya’alon.

In context of Israel’s security threats, Chairman of the US Joint Chiefs of Staff Gen. Martin Dempsey is to visit Israel next week to meet Ya’alon, and likewise hold his first work meeting with the recently appointed IDF Chief of Staff Gadi Eizenkot; the defense leaders will discuss the threats from Syria and Gaza.