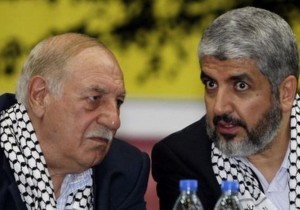 Amid rumors of backchannel talks between Israel and Hamas, the Palestinian Islamist organization has reportedly summoned other Palestinian factions to Beirut where the details of a long-term truce with Israel will be discussed.

According to the London-based Arab language newspaper Rai-al-youm, Moussa Abu Marzouk, a senior Hamas figure, had already met with some of the factions in the Lebanese capital regarding the possibility of a ten-year truce with Israel.

Brokered by former British Prime Minister Tony Blair and agreed to by Khaled Mashaal, the terms of the truce would include the freeing of Palestinian militants re-arrested after being released in the Gilad Schalit deal, the construction of a floating port linked to Turkish Cyprus as well as a significant easing of restrictions on Gaza’s entry points.

The skepticism surrounding the possibility of a truce or even the taking place of such talks has come from both camps, with some Hamas figures, including Ismail Haniyeh, denying that Israel has been part of recent negotiations. More militant elements in Hamas, including the military wing of the organization, outright rejected the possibility of a truce, asserting that “our battle with the enemy continues and will increase in ferocity and intensity.”

Among other issues meant to be discussed in the Beirut meeting is the plight of Palestinian in Syria’s Yarmouk refugee camp. Seeking to consolidate a Palestinian fighting force to roll back the advance of the Islamic State in the area, mediators have supposedly struck an agreement between between Palestinian factions and militants in the Yarmouk camp. The initiative, which would allow the transfer of militants and fighters to affected areas, alleged won the backing of the UN and has the blessing of the Syrian regime whose own four-year fight against rebels has seen its sphere of control shrink dramatically.

Last week the office of Prime Minister Benjamin Netanyahu denied claims that it had engaged in any talks with Hamas, “neither directly, through third countries, nor through mediators.”

The Palestinian Authority has also expressed concern regarding any sort of agreement reached between Hamas and Israel, independently from itself. Fatah spokesman Ahmed Assaf said that, “since Hamas is turning a blind eye to the Palestinians’ national rights and principles,” such an accord would mean consolidating the split between the West Bank and Gaza Strip.

“Hamas has chosen its narrow interests and winning Israeli recognition at the expense of the higher interests of the Palestinians,” the Fatah spokesman declared.“Hamas’s goal is to rid itself of its crisis without caring about the Israeli scheme to liquidate the Palestinian cause and indefinitely delay the discussion over core issues such as Jerusalem, refugees and settlements.”

Assaf urged Palestinians to thwart the “Hamas-Blair conspiracy to slice off the Gaza Strip and eliminate Palestinian rights.”