You are here: Home / MidEastGulf / Hamas sentences Israel collaborator to death by hanging 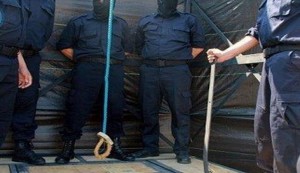 A Gaza man accused of collaborating with Israel was sentenced to death by hanging at a Hamas military court on Thursday, AFP quoted a court source as saying.

The guilty party, who was convicted of “collaborating with the occupation,” was only identified by his intials, A.S.

Gunmen wearing masks and dressed in black shot seven of those condemned, whose faces were covered and hands bound, in front of worshipers emerging from the Omari Mosque, a.k.a the Great Mosque of Gaza, on Palestine Square in the Old City, in the first public executions in the Strip since the 1990s.

A further 11 were killed at an abandoned police station near Gaza City, Hamas security officials said.

“The resistance has begun an operation called ‘Strangling the Necks,’ targeting collaborators who aid the occupation, kill our people and destroy houses,” said Al-Majd, a website run by Hamas’s internal security service.