You are here: Home / Mediterranean / Hamas official says terror group will continue to arm even if truce reached 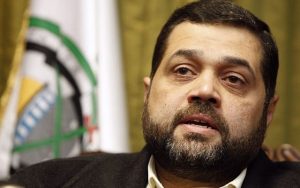 The Hamas terror group will continue arming itself even if a truce agreement is signed with Israel, a senior official in Gaza said, like reported by toi.com..

Hamas foreign relations chief Osama Hamdan said that even if a long-term ceasefire deal with Israel is reached, the terror group avowed to the Jewish state’s destruction would continue to “build its capabilities because it has no faith in the Zionist entity.”

Hamdan was quoted in Palestinian media as saying that the ceasefire deal currently being negotiated with the help of Cairo does not include the building of a seaport or a airport serving the Hamas-run enclave.

“Everything that has been published about this so far is a lie,” he asserted.

“The Zionist enemy has reached the conclusion that it’s impossible to thwart the Palestinian resistance,” Hamdan said, adding that Israel “will see that it made a grave mistake if the truce with Hamas fails.”

Hamdan also said Hamas was interested in a prisoner swap deal “more than previously.” He said that deal was separate from the ceasefire talks, although Israel insists no formal truce will be reached without the release of Israeli civilians and bodies of IDF soldiers believed to be held in Gaza.

Hamas is believed to be holding the remains of IDF soldiers Oron Shaul and Hadar Goldin, whose bodies were captured by the terror group after they were killed in Gaza during the 2014 war. It is also assumed to be holding Israeli citizens Avera Mengistu and Hisham al-Sayed, who each entered Gaza of their own accord.

Numerous reports have said Israel is in advanced talks with Hamas, via UN, Egyptian and Qatari mediation, for a long-term truce in the Strip.

On Sunday, Hamas official Husam Badran said Palestinian factions had postponed talks in Cairo on a long-term ceasefire with Israel as well as on inter-Palestinian reconciliation.

Gaza has seen a surge of violence since the start of the “March of Return” protests along the border in March. The clashes, which Gaza’s Hamas rulers have orchestrated, have included rock and Molotov cocktail attacks on troops, as well as attempts to breach the border fence and attack Israeli soldiers.

Palestinians in Gaza have also launched incendiary airborne devices toward Israel, burning thousands of acres of forest and farmland resulting in millions of shekels of estimated damages.

At least 171 Gazans have been killed by Israeli fire since the start of the clashes, according to the Hamas-run health ministry. An Israeli soldier was shot to death by a Palestinian sniper. Hamas has acknowledged that dozens of the Palestinian fatalities were members of terror groups.

Additionally, Israel and Hamas have engaged in a number of brief exchanges of fire in recent months that have seen terror groups in Gaza launch hundreds of rockets and mortars toward Israeli territory, including one earlier this month that was the largest flareup in violence since the 2014 war.

UN envoy Nickolay Mladenov and Egyptian officials have been seeking to broker a long-term truce between Israel and Hamas. The two sides have fought three wars since 2008.

Israel has imposed a blockade on Gaza since Hamas, which is sworn to Israel’s destruction, seized the territory from the Palestinian Authority. It says the blockade is in place in order to prevent weapons and other military equipment from entering the Strip.