You are here: Home / Mediterranean / Hamas official claims 50 of the 62 killed in Gaza were its terrorists 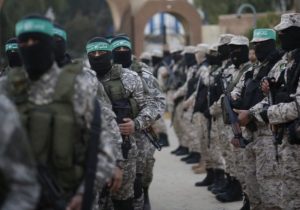 Fifty of the 62 Palestinians reported killed during Monday’s deadly protests on the Gaza border were Hamas activists, a senior Hamas official claimed yesterday.

An Israel Defense Forces (IDF) spokesperson for Arab media posted a video on Twitter of an interview with the Hamas official, Dr Salah Albardawil, in which he claims 50 of those who died were members of Hamas. His claim was in response to a question about claims that Hamas sent youths to die in the protests as political fodder, the Israeli newspaper Haaretz reported.

The claims comes after Islamic Jihad published a statement on Tuesday claiming that three of the 62 killed were members of that organisation’s military wing. But an Islamic Jihad official told Haaretz that Israel’s attempt to dismiss the victims as terrorists was pathetic.

Haaretz also reported that Gaza health officials have cast doubt on initial claims that an eight-month-old baby died from Israeli tear gas fired during mass protests on the Gaza border with Israel.

The newspaper reported that a doctor, speaking on condition of anonymity, said on Tuesday that the baby, Layla Ghandour, had a pre-existing medical condition and that he did not believe her death was caused by tear gas.

Also on Tuesday, Layla’s family claimed that the baby had ended up in the area of the protest as a result of a mix-up. This came after the Gaza Health Ministry initially counted her among several dozen Palestinians killed on Monday.

A Gaza human rights group, Al Mezan, has said that it is looking into the circumstances of the infant’s death.