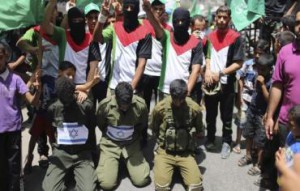 A senior Hamas official in the Gaza Strip called on Thursday for the abduction of Israelis, who would be swapped for Palestinians held by Israel, according to maannews.

“We tell the Zionist enemy: you are all a target for us and the resistance, we will fight you until we finally get rid of you and take as many captives as possible to free our heroes,” said Khalil al-Haya, whose movement de facto rules the Palestinian enclave.

“Our men, our women, our children all envision kidnapping your soldiers and settlers, wherever they are,” he said on the eve of Prisoners Day which Palestinians mark April 17.

“And it is our right because we have no other way to free our heroes, and it is the Zionist enemy responsible for this state of affairs,” Haya told hundreds of Palestinians.

Palestinians in the West Bank and Gaza Strip rally each year on April 17 in solidarity with the nearly 6,000 prisoners held by Israeli.

Haya said Palestinian prisoners should “rest assured” because militant groups led by Hamas’s military wing al-Qassam Brigades “will release you as they did your brothers” in 2011.

Ahmed al-Mudalal of the militant Islamic Jihad movement promised told the rally that “the resistance will not falter until Israeli prisons are emptied of their Palestinian prisoners.”