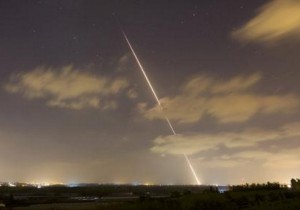 The Gaza-based terror  organization Hamas on Monday reportedly test-fired at least one long-range missile, launching the weapon into the the Mediterranean Sea, according to a Channel 2 report.

No injuries or damage were reported in the incident.

Palestinian terrorists continually shoot rockets into Israeli territory, as well, with a number landing in residential areas located primarily in the South.

Earlier this month, Palestinian terrorists in Gaza fired a rocket at Sderot  setting off air raid sirens and narrowly missing homes. The rocket exploded in a road in the southern town, failing to cause physical injuries, but sending one local resident into shock.

Following the attack, an ISIS-linked Salafi jihadists in Gaza claimed responsibility. An online statement said the attack was part of the set “jihad against Jews,” and a response to the arrest by Hamas of five Salafi operatives in recent days.