You are here: Home / Mediterranean / Hamas is behind Gaza kite terrorism 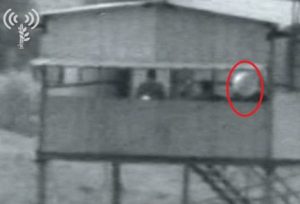 Incriminating images show the terrorist group is “spearheading” the campaign of incendiary and explosive balloons and is launching them from its positions in Gaza • Arson attacks persist Sunday with some 30 fires in various locations in Israel’s south.

The IDF on Sunday revealed the operational methods behind Hamas’ cross-border arson campaign and issued incriminating photos proving that the terrorist group launches incendiary devices and explosive balloons from its positions in Gaza.

The IDF said in a statement that the flaming kites and exploding balloons that have been terrorizing Israeli communities surrounding the Gaza border in recent weeks are prepared in bulk by Hamas operatives on the orders of their commanders.

“This arson terrorism is an intentional and well-timed act of terror perpetrated by the terrorist organization Hamas,” the IDF statement said. “Hamas is spearheading the explosive and incendiary kite phenomenon, and it is [Hamas] that is responsible for launching them [into Israel] and therefore Hamas bears the responsibility for this terrorism.”

“After it initially began as a grassroots terror phenomenon, in recent weeks we have seen Hamas lead the efforts as an organized campaign,” the army said.

The IDF also released names and photographs of some of the members of the arson terror cells.

Meanwhile, the arson attacks persisted on Sunday with some 30 fires in numerous locations in southern Israel, near the Gaza border. Two explosive balloons were found in the Merhavim Regional Council.

In response to the arson attacks, the IDF targeted a vehicle used by an arson cell operating in southern Gaza, and a truck used by another Hamas cell to make incendiary and explosive balloons. According to reports from Gaza, three Palestinians were wounded in the IDF strikes.

Palestinian media outlets in Gaza also said a Hamas position in the coastal enclave was destroyed in a separate IDF attack.

Also Sunday, a Palestinian demonstrator, who was wounded by IDF fire during a Gaza border protest on Friday, succumbed to his wounds, Palestinian sources said.

‘A solution has to be found’

“We came here to show support for the residents and lend them strength,” Shapira said, amid the devastating arson wave. “This isn’t a war in military terms but it is a daily battle nonetheless. The children breathe in the smoke from these fires, and the damage gets worse with each passing day. A solution to put an end to this matter has to be found.”

Agriculture Minister Uri Ariel also toured the Gaza area and listened to farmers talk about the challenges they face.

“I came here to be with the incredible farmers; this is Zionism in 2018 at its best. We will check with [Finance Minister Moshe Kahlon] how to help the farmers here. The [Agriculture Ministry] is helping and will help to keep [the farmers] strong,” Ariel said.

Discussing ways to combat the kite terror, Ariel said those who launch flaming kites should be targeted by the military.

“Whoever wages terror against Israel should be shot; terror is terror is terror,” he said. “Those who harm Israel and its citizens shouldn’t come away clean. You don’t need to kill, hitting them is enough. After the first 10 [who are hit], there probably won’t be an 11th.”