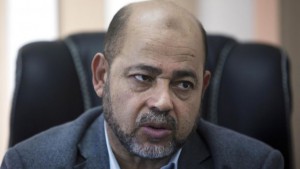 A senior Hamas official is slated to meet with Hezbollah secretary-general Hassan Nasrallah in Beirut in the coming days in a bid to strengthen ties between the two terror groups.

The meeting will mark Marzouk’s second powwow with the Hezbollah leader in a month.

The two are expected to discuss Hamas’s reported backchannel talks with Israel over a long-term ceasefire.

Shiite Hezbollah is an Iranian proxy fighting alongside the Assad regime in Syria while Hamas is a Sunni outgrowth of the Egyptian Muslim Brotherhood that supports Sunni jihadist rebels in Syria. Yet while the two groups do not see eye-to-eye on the Sunni-Shiite conflict roiling the region, they have a long history of cooperation when it comes to the shared enemy Israel.

In 2006, as conflict in Gaza escalated after Hamas’s cross-border kidnapping of IDF Cpl. Gilad Schalit, Hezbollah came to Hamas’s aid by launching its own raid on IDF forces on Israel’s northern border, sparking the Second Lebanon War.

In the years since Hamas’s 2007 takeover of the Gaza Strip from the Palestinian Authority, the group has grown closer to Hezbollah’s patron Iran, which has proved more willing than Arab states to supply the organization with funds and weapons for its conflict with Israel.