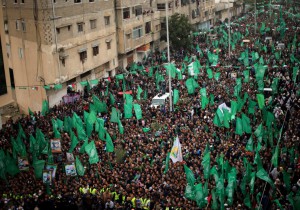 Hamas claimed victory earlier this month, not on the battlefield but in the class room, after a student group closely affiliated with the Islamist group garnered the most votes in an election at the campus of Birzeit University, Ma’an news reported Wednesday.

According to one university official, voter turnout stood at 77 percent from among the 9,000 undergraduates eligible to vote and while the University has long been a stronghold of support for Fatah, the party of the West Bank’s reigning Palestinian Authority and Mahmoud Abbas, the Hamas-linked Islamic List took 26 seats while the Fatah’s affiliate took only 19.

Other leftist parties also took part in the elections. The list associated with the Popular Front for the Liberation of Palestine took  five seats while a smaller coalition of leftists groups took one.

Debates between party representatives were among the most widely attended events marking the election period. Topics ranged on various issues affecting Palestinian and wider Arab society.

Students linked with Hamas reportedly put emphasis on Fatah’s cooperation with Israeli authorities concerning the security situation in the West Bank, scoring political points by asserting that the ruling Palestinian Authority was not protecting the Palestinian people’s interests

Proponents of Hamas also pointed to the terrorist group’s performance during their last confrontation with the Israeli Defense Forces during Operation Protective Edge, claiming that the group proved its mettle and strength during the summer conflict.

Khaled Mashaal, Hamas’ political leader praised the election’s democratic nature, saying “everyone is a winner in Birzeit University and we all win when we rely on democracy.”

Considered one of the leading Palestinian universities and the most liberal, the triumph of the Islamic List over the Fatah affiliated al-Shabiba bloc may indicate a serious shift in the attitude of the young Palestinians that was not thought to have reached the higher learning institutions of Palestinian society.

Since the last Palestinian national elections in 2006, in which Hamas triumphed and took control of Gaza after a bloody civil war against Fatah, elections on Palestinian university campuses have become an important barometer for popular Palestinian political attitudes.

Last month, Fatah-associated parties claimed their own victories during student elections in the Hebrew University in Jerusalem as well as in Bethlehem University. However, Hamas groups do not engage in political activities at those institutions, rendering a reading of political sectarianism at those schools difficult to determine.