You are here: Home / Mediterranean / Hamas asked Algeria to take in its leaders who were forced to leave Qatar 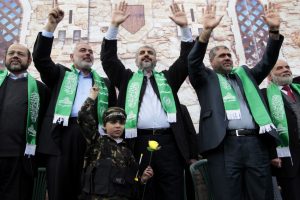 The Hamas terror organization has approached Algeria and asked it to take in some of its leaders who were forced to leave the group’s longtime base in Qatar, i24news reported Monday, citing the London-based Al-Sharq al-Awsat newspaper.

According to the report, Hamas has sought to dissolve its leadership among several countries including Lebanon, Malaysia, Turkey, and most recently Algeria.

Hamas hopes that Algeria will absorb its spokesman Sami Abu Zuhri, who is already currently residing in the country, and to transfer some of its senior members there after Abu Zuhri establishes an office in the capital.

The paper said that Hamas officially approached Algiers with the request, but has yet to receive a response.

In recent years, Qatar has served as a headquarters for Hamas officials abroad. In June, however, reports indicated that Qatari authorities decided to expel several Hamas members, explaining the expulsion was driven by “external pressures.”

Qatar is also currently dealing with a boycott with Saudi Arabia, Egypt, Bahrain and the United Arab Emirates, all of which severed diplomatic ties with Qatar over accusations it sponsors terrorism, including Hamas.

Qatar’s Foreign Minister has rejected the claim that Hamas is a terrorist organization, while the country’s envoy to Gaza recently said Doha was committed to funding projects in the Hamas-run enclave, despite pressure from the countries that boycotted it.

The crisis between Qatar and its neighbors, however, has prompted Hamas to seek to spread its leadership throughout a number of countries, rather than to concentrate its political weight in one location, Al-Sharq al-Awsat said.