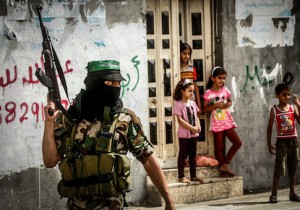 An explosion has taken place at or near Hamas’s Internal Security HQ at the Sheikh Radwan neighborhood in Gaza, Arab sources told Israeli newspaper Maariv Tuesday. The newspaper estimated that the blast I slinked to the arrest of an ISIS man in Gaza, following the fighting between ISIS and Palestinians in the Yarmouk camp in Damascus.

Initial reports of casualties were later denied and the media said no one was hurt. Egyptian media said the blast was caused by an improvised device detonated near a mosque in northwest Gaza.

The Turkish Anatalia news agency cited witnesses who said the blast was detonated in an area next to the mosque that was empty of people.

Sources in Gaza said that “from the beginning of the year, there have been incidents of blasts and shootings in Gaza, mostly following confrontations between Hamas and Gaza men.”

Maariv notes that in mid-March, the spokesman for the interior ministry in the Hamas government blamed Palestinian Authority Chairman Mahmoud Abbas’s forces of trying to create chaos in Gaza, with car bombs and shootings. Abbas’s Fatah terror organization denied any link to the said incidents.

A Palestinian Authority official said Monday a delegation was heading to Damascus for talks on helping residents inside the Yarmouk camp, parts of which have been overrun by the Islamic State jihadi group. ISIS has claimed the beheadings of at least two Hamas commanders.

Hundreds of families were evacuated from the camp in a southern neighborhood of Damascus after ISIS jihadists launched on attack on Wednesday.

Palestinian forces inside Yarmouk – mainly aligned with Hamas – are largely surrounded by ISIS fighters who have captured the majority of the camp. On Monday, ISIS uploaded a video claiming to show the moment it completed its takeover of the camp, though that claim that has not yet been independently verified.