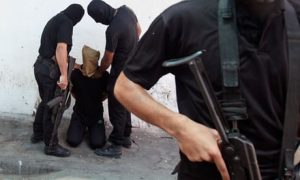 Hamas security forces recently set out on a large-scale campaign of arrests against Islamic State-aligned operatives, especially those belonging to the Salafist sect, in the wake of a video clip released by Wilyat Sinai, the Egyptian branch of the Islamic State, like reported by breitbart.com.

The video showed a former Hamas member and the son of a high-ranking official in the terrorist group executing suspected Hamas agent Moussa Abu Zamat, who infiltrated the ranks of IS in Sinai and fed information to Hamas.

The executioner, Rashed Dajani, is the son of Hamas official Yehya Dajani and was seen in the video shooting a Hamas member from Rafah. The clip angered Hamas in the Gaza Strip and the Dajani family was quick to release a statement condemning the execution and denying any responsibly for Dajani’s actions, which they called a crime that contradicts the values of Islam and the Palestinian people.

Senior jihadist Abu Baker al-Maqdesi said that among those jihadists arrested recently are some who were released in recent weeks from Hamas prison facilities. Some were imprisoned for over a year before their recent release.

According to al-Maqdesi, the number of arrested individuals between last Thursday and early Monday morning has passed 50, and 40 of those arrests were conducted on Thursday and Friday following the release of the video.

Al-Maqdesi said some of those arrested were taken into custody on the grounds that they used to be Dajani’s friends before he joined IS.

A security source in Hamas confirmed the claims that arrests were made in recent days against IS-aligned jihadists, but he said there is no direct connection to the video.

“We are always arresting anyone who tries to endanger the security of the residents of the Gaza Strip,” said the source.

“The terrorists in Sinai want to drag the Gaza Strip into conflict with Egypt and we won’t be complicit in that,” the source added. Hamas officials often use strong language against their rivals.