You are here: Home / Analysis / Hamas and Iran: a new era?

As the reactions to Hamas’ new charter continue apace, one important omission or at least something that has been under-reported is Hamas’ relationship with Iran, like reported by middleeastmonitor.com 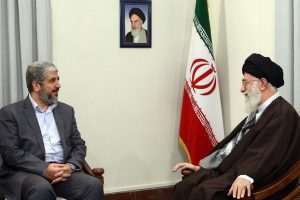 Long regarded as strong partners, the relationship between Iran and Hamas came under enormous strain following the latter’s decision in February 2012 to endorse the Syrian rebellion.

From Iran’s perspective, this was a huge blow in so far as it undermined the credibility of the so-called “Axis of Resistance” by reducing it to an effectively sectarian Shia block. In the years since, even though credible reports of a partial rapprochement have emerged, the two sides have failed to place the relationship on a stable footing.

Hamas’ new charter can potentially exacerbate the crisis in Iran-Hamas relations by casting the Islamic Republic’s hardline position on the Israeli-Palestinian conflict as both extreme and hopelessly unrealistic. Furthermore, in the long term, the revised Hamas position has the potential to mould, shape and potentially shift Iran’s overall attitude to the State of Israel.

Officially, the Islamic Republic of Iran hasn’t reacted to the new Hamas charter. Instead, and perhaps by way of obfuscation, the Iranian foreign minister, Mohammad Javad Zarif, congratulated Ismail Haniyeh on his ascension to the head of Hamas’ political bureau.

Golanbari criticises the selective analysis and conclusions of other analysts, presumably including one by a former Iranian diplomat who had accused Hamas of appeasing Arab states. Golanbari’s conclusion is that the new policy document allows Hamas to retain its ideological principles whilst exercising greater flexibility in terms of methods and general approach to issues.

This is an important point and one which appears to connect to a broader international reception of the new charter anchored in a qualified acceptance of Hamas’ inherent legitimacy. In short, the argument goes, Hamas needs to break out of its isolation and engage in deeper international diplomacy, and the revised charter (which unlike the old charter cannot be reduced to an anti-Semitic trope) enables the Islamic movement to do just that.

From a policy point of view, and in immediate terms, none of this is particularly reassuring to Iranian strategists and policy makers. Iran needs to keep Hamas within the so-called axis of resistance, at least at a rhetorical level. This is why Iranian leaders and officials have been remarkably self-restrained in respect of Hamas’ break with Damascus. Listening to official Iranian media one gets the impression that Hamas is still a strong Iranian ally and fully aligned with the cardinal tenets of the so-called “resistance” block.

Even though Hamas has stopped short of recognising Israel, the pragmatic acceptance of 1967 borders poses a challenge to Iranian policy on the Israeli-Palestinian conflict. Iran does not recognise any such borders and is officially committed to asserting Palestinian sovereignty on all the territory which comprise Israel.

The Islamic Republic is often chided for appearing more Palestinian than the Palestinians themselves, and Hamas’ qualified shift to the centre, more than ever accentuates this perception. In due course, Iranian policy has to address this anomaly, particularly if Hamas’ new policy document generates more than expected international acceptance, thus encouraging the Islamist group to move even further toward the centre ground.

An Iranian policy shift – short of recognising Israel – may become inevitable if Hamas bridges the gap with Fatah to present a united Palestinian front. In this scenario, by sticking to its hardline position the Islamic Republic risks losing diplomatic and political influence on key Palestinian factions.

But the difficulty for Iran stems from the fact that its position on the Israeli-Palestinian conflict is subsumed under a more comprehensive struggle against Israel. There is a broader Levantine connection in the form of Iran’s strategic alliance with Syria and sponsorship of Hezbollah and allied movements in Lebanon. At a rhetorical level, this alliance finds expression through the “Axis of Resistance” narrative which is framed as a counter to Israeli and American regional policies.

But Iran’s issue with Israel goes even deeper than that, in the form of a conventional inter-state conflict. Although largely fought by proxy, the two sides have clashed directly, principally in the intelligence arena, with Israel accused of assassinating Iranian nuclear scientists, and Iran reportedly retaliating by attempting to assassinate Israeli diplomats.

Whilst the Islamic Republic frames this conflict in ideological terms through the discourse of anti-Zionism, in practical terms it is a strategic conflict stimulated by a wide range of clashing interests and positions. Iran cannot credibly revise its position on the Israeli-Palestinian conflict without at least reframing its own conflict with Israel.