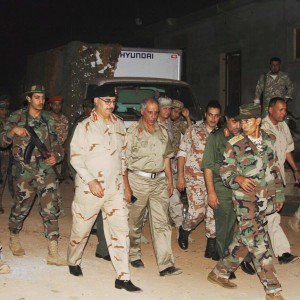 Armed Forces Commander-in-Chief General Khalifa Hafter visited front line troops in Benghazi yesterday, urging them to speed up the ouster of Ansar Al-Sharia and IS fighters from the remaining areas of the city that they hold.

He is also reported to have admitted that the advance of his troops is being held up by snipers. This has been a perennial problem in the street fighting at which the Libyan Army and Saiqa forces have not excelled. A few well-positioned snipers have held up large bodies of troops, who have generally only been able to move forward when the buildings used by the snipers have been blasted by air strikes or artillery.

Despite these known problems, Hafter has repeatedly promised that the battle would be won within a month. Yesterday the figure he gave was three weeks.

One enduring puzzle for those who have been following the bitter fighting is that the government forces have been unable to cut off the supplies to the terrorists and their ability to evacuate their wounded. These movements are all by sea, either to the small port of Mreisa to the south west of the city, or through the main harbour or onto the beach near Sabri.