You are here: Home / Mediterranean / Hafter has high-level Moscow meets 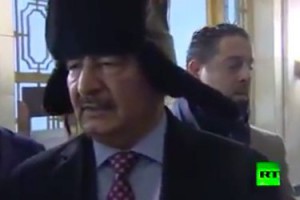 Armed forces commander-in-chief Khalifa Hafter has come away from two days in Moscow during which he met Russia’s defence and foreign ministers.

Diplomatic sources have said that on this, his second Russian visit since the summer, Hafter was seeking military as well as political support.  Both Moscow’s defence minister, general Sergei Shoigu and foreign minister Sergey Lavrov repeated that Russia backed the UN arms embargo and the Libyan political agreement.

Last month the Kremlin indicated that it would be prepared to supply military assistance to the Libyan government if it was requested. However, because Russia is respecting the Libyan Political Agreement to the letter, it will not recognise the Government of National Accord until its cabinet, as proposed by Faiez Serraj and the Presidency Council, has been endorsed by House of Representatives

Hafter was wearing a fur-lined Russian hat when he stopped in the foreign ministry lobby to talk to Arabic-language journalists this afternoon.

A foreign ministry spokesman said the talks had “Focused talk on the evolution of the military and political situation in Libya, with an emphasis on the need to unite all Libyans to fight the terrorist organisations in the entire territory of the country”.