You are here: Home / Mediterranean / Haftar’s true agenda in Libya 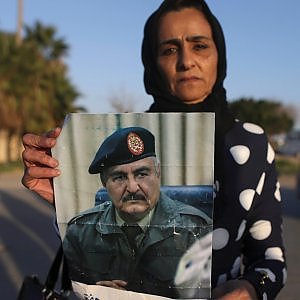 As he managed to stretch his control over most of eastern Libya, including the oil fields, after ridding Benghazi of militant threats, Field Marshall Khalifa Haftar is now looking to capitalize on his gains in a bid to have the final say on his country’s future, like reported by arabnews.com.

His entry into the Libyan political fray, following the toppling of Muammar Qaddafi in 2011, was relatively late. He was once close to the defunct regime, but then spent two decades in exile in the US. Supported by various factions in the eastern part of the war-torn country, Haftar is quickly emerging as a political and military powerbroker who has become essential to reaching national reconciliation and preventing Libya from disintegrating.

Since he launched his offensive against the militants in Benghazi in May 2014, Haftar has managed to form what is now called the Libyan National Army (LNA). His recent victory over Al-Qaeda affiliate Ansar Al-Shariah, and other militant groups vying for control of the east, has affirmed his power while undermining efforts by the UN-backed Government of National Accord (GNA) led by Fayez Sarraj in Tripoli.

His negotiating position became stronger when his forces took over the so-called Oil Crescent in September 2016, putting him in control of Libya’s only source of foreign currency. He has long opposed the GNA, which includes representatives of militant groups, and his main ally, the speaker of the Tobruk Parliament Agilah Saleh, has derailed attempts by the UN and Sarraj to fully implement the Skhirat agreement of December 2015.

Tilting things in his favor is Russia’s recent announcement that it was interested in mediating a solution in Libya. A few weeks ago, it invited Haftar to visit one of its warships in the Mediterranean, sending a message that it now stands with the 73-year-old general.

A recent attempt by Cairo to host a face-to-face meeting between Sarraj and Haftar was a failure. The latter made clear that he is against political Islam and in particular the Muslim Brotherhood, whose loyalists have considerable influence over the Presidential Council and the GNA. Today Libya has three governments — only one is internationally recognized — and two armies, in addition to a dozen armed militias with tribal affiliations.

Russia has been critical of NATO’s intervention in Libya in 2011, which it saw as the reason for the chaos that followed. US and European efforts to stop the ensuing civil war, mainly between rival tribal factions, have achieved little as Libya inched closer toward partition.

The Sarraj government has failed to win recognition by rivals in Tripoli, and is yet to implement the Skhirat agreement. On Monday, it was reported that Sarraj’s convoy was shot at in the capital by unknown assailants.

The administration of former US President Barack Obama had reduced its involvement in Libya following the killing of its envoy in Benghazi in 2012 by radical groups. But now there are signs that the administration of his successor Donald Trump may actually work with Russia on Libya.

It is not farfetched that both Moscow and Washington may be entertaining the idea of backing Haftar to emerge as Libya’s strongman. His credentials as a fierce opponent of the Brotherhood who controls a sizable military force are appreciated by the US and Russia.

Sarraj, who has called on Moscow to help influence Haftar, is facing growing opposition from his own supporters. Still, his tribal allies in western Libya, led by the Misrata brigade, were able, with the help of US Special Forces, to limit the threat of Daesh, especially in their stronghold of Sirte. NATO still believes he can succeed in uniting various factions under the umbrella of one Libyan army.

But now Haftar, who is also supported by Egypt, appears to be backing away from a proposal to create a joint committee to negotiate national reconciliation and hold elections by February 2018. He may be waiting for the Trump administration to unveil its policy on Libya, while hoping that the Sarraj government will eventually be abandoned by NATO.

For the Europeans, Libya’s political stability is essential to controlling the crossing of illegal immigrants, and possibly militants, from Libyan shores into Europe. In addition, creating a well-trained national force will ensure that Daesh and its ilk do not establish a foothold in Libya.

This is also important for the country’s immediate neighbors. This week, the foreign ministers of Egypt, Tunisia and Algeria met in the Tunisian capital to discuss the Libyan crisis. They agreed that any solution must be achieved by Libyans themselves.

But that is easier said than done. Libya is a vast tribal country with weak national institutions. The eastern part has long entertained calls for independence. And with militant groups still active in the western part, reconciliation with Haftar seems remote.

But by leaning toward Haftar, Russia, Egypt and others could be foiling the last possible chance for a power-sharing agreement that seems to be the best formula to run the country until fresh elections are held. Haftar may be delaying an accord with his rivals in a bid to jockey for ultimate control of most of Libya, a risky gamble that could easily backfire.