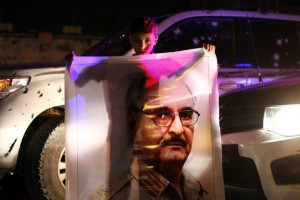 When forces led by General Khalifa Haftar swept through key oil facilities in eastern Libya, they met almost no military challenge despite the stakes involved.

The capture of the oil terminals upsets the balance of political forces in Libya and makes the survival of the leader of the UN-brokered government in Tripoli less likely. The Government of National Accord, headed by Fayez al-Sarraj, is almost entirely dependent on oil revenues for its income. It said Libya was at a “turning point” after the assault on the oil ports.

No rival military force is considered able to threaten Haftar’s success in putting most of the country’s oil wealth under his grip.

Misrata militias, the main military power of the government in Tripoli, are tied up battling Islamic State (ISIS) fighters in Sirte. Any attempt to roll back Haftar’s gains by mobilising other militias protecting the government from rival Islamist groups would likely throw Tripoli into more chaos.

“The operation was carefully prepared in total secrecy with regard to ammunition, weapons and soldiers. The storming and takeover of the gates of the terminals were carried out in a record time of about 15 minutes,” Colonel Fawzi al-Mansouri, one of Haftar’s military spokesmen, said of the capture of the oil facilities.

“The resistance lasted 45 minutes with some fleeing and others were taken hostage and the seizure of their weapons,” he added in a statement.

Three soldiers were slightly wounded, Mansouri said, detailing the capture of the oil terminals of Ras Lanuf on September 12th and Zueitina the day before. Brega and Sidra followed within 24 hours.

“The latest outpost of Jadhran was taken over,” Mansouri said in reference to the commander of the Petroleum Facilities Guards (PFG) forces, Ibrahim Jadhran, an ally of the Tripoli authority who had controlled the terminals since 2013.

About 90% of Libya’s oil exports flow through the seized facilities.

PFG militiamen are recruited from tribes scattered near oilfields and oil terminals and other facilities including al Magharba tribe of Jadran.

“The whole operation was prepared with the support of tribal chiefs. The tribal chiefs and leading figures of the tribes gave orders to their men in the PFG to avoid using their weapons and withdraw or let Haftar’s forces take over the facilities,” said Libyan political activist Kamel al-Houni.

“That is why there was no bloodshed. The operation was very peaceful because of the broad backing of the tribes and their chiefs,” he said.

“Even Jadhran was aware of the upcoming operation. He had evacuated his family from the area more than one week before the attack.”

Houni said that tribes in the eastern oil basin switched their backing from Jadhran to Haftar because they see Haftar as the “saviour of Libya” from its political infighting and regional and ideological divides.

“They dumped Jadhran as he proved lacking vision to propose an alternative to the crisis. He floated the idea of protecting the oil wealth from corrupt politicians in Tripoli by shutting down the oil exports,” said Houni.

“But over time, that move proved wrong because the closure had cost the loss of a lot of revenues from the oil for the whole population,” he added.

The victory for Haftar is likely to bolster his image after he was seen in the West as having no role in the settlement of Libya’s problems because of his negative view about building a democracy in the country under the dominance of Islamists, whom he views as terrorists.

The United States and other Western countries have called on Haftar’s forces to withdraw from the seized oil terminals, ironically drawing a rebuke on September 12th from the internationally recognised parliament, which had elevated Haftar to field marshal to reward him for the move.

The United States, France, Germany, Italy, Spain and Britain said Sarraj’s government was the “sole steward of these resources”, adding that “Libya’s oil belongs to the Libyan people”.

“The ports of Zueitina, Brega, Ras Lanuf and Sidra were handed over to the National Oil Company” (NOC), said Colonel Ahmad Mesmari, another spokesman for Haftar.

“The entire oil crescent is under the NOC’s administration,” he added, stressing that a force under Haftar’s control would continue to guard the ports without any involvement in the operations.

UN envoy Martin Kobler had struck a deal with Jadhran in July to try to resume oil exports but the move failed.

The NOC blamed Jadhran, who attempted to sell oil tanks without government approval, for causing the country to lose more than $100 billion from his blockade of oil exports.

“I said always that General Haftar must have a role in this joint united army structure, and I would like to sit together with him and discuss it,” Kobler said after briefing the UN Security Council September 14th.