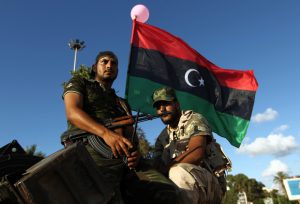 The militants targeted the eastern city of Ajdabiya, AFP reported, and it follows a wave of attacks from Islamic State group-linked militants against Haftar’s self-styled Libyan National Army (LNA).

Meanwhile, militants stormed a checkpoint some 150 kilometres (90 miles) away and kidnapped one fighter manning the roadblock, a militia security source told the agency.

There was no immediate claim of responsibility for either of Tuesday’s attacks.

The fall of the group’s former stronghold in Sirte has seen their fighters launch guerilla-style attacks on Haftar-linked militias in the east.

IS claimed responsibility for a car bomb attack in eastern Libya in March, which left at least three people dead.

Haftar-controlled Benghazi was also hit by twin bombings in January, killing at more than 20 people.

Libya has been torn between rival factions since the fall of long-time dictator Muammar Gaddafi in 2011, following a popular uprising.

Two rival governments formed – a UN-backed authority in the capital Tripoli and rival administration in the eastern city of Tobruk – and have fought for control of the country.

Haftar has backed the eastern authority.

The unrest has allowed radical militias to gain ground, with the IS-held city of Sirte falling to forces linked to the western authority in 2016.