You are here: Home / Mediterranean / Haftar in Algeria to discuss Libyan reconciliation 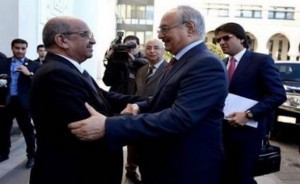 During the meeting the men addressed developments in the political and security situation in Libya and ways to restore the country’s security and stability.

Messahel has stressed Algeria supports a political solution to the conflict in Libya in the framework of the political agreement signed by the Libyan parties on 17 December 2015, El-Khabar newspaper reported.

Haftar heads the Libyan National Army which forms part of Libya’s Government of National Accord (GNA).