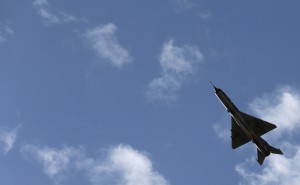 “This morning, two air raids targeted the Al-Jufra military airbase, which is used as a headquarters by the Defend Benghazi Brigades,” said Mohamed Abu Ras al-Sharif, who is well known in Al-Jufra.

DBB is a militia made up of soldiers and civilians turned freedom fighters fighters during the 2011 uprising from the city of Benghazi and Ajdabiya. The DBB forces fought alongside the same commanders in the battles against former dictator Muammar Gaddafi in 2011 that they fight with today.

In Ajdabiya, the DBB allied with Adjabiya’s military operations centre, which is the new name of the Shura Council freedom fighters of Ajdabiya.

Haftar’s forces used the airport in Ras Lanuf to launch the warplanes that fired the airstrikes on the DBB base, said an anonymous military source.

One person was killed and 14 others injured in the airstrike attack, according to Mohamed Ahmoud, a military official in Haftar’s forces.

The Al-Jufra base is supposedly under the control of the UN-backed Government of National Accord (GNA).

Haftar has been at odd with the GNA and he has also been accused of preventing the Libyan parliament based in Tobruk from supporting the unity government.