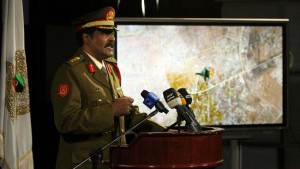 The armed forces led by Marshal Khalifa Haftar announced a “great victory” against jihadi fighters in Libya’s second city of Benghazi on Thursday.

“We now have total control of the Qawarsha sector,” 10 kilometres west of the centre of Benghazi, said Ahmad Mesmari, spokesman for Haftar’s forces.

Mesmari hailed what he termed a “great victory” in what had been a stronghold of Ansar al-Sharia, a group close to al-Qaeda that is classified as a terrorist group by the United Nations and United States.

Haftar’s forces, called the Libyan National Army, were pursuing the Islamist militants in Qanfouda, further west, one of the last remaining jihadi-held sectors of the Mediterranean city.

He did not give a casualty toll for the fighting but a military source said Wednesday that 12 of Haftar’s soldiers had been killed in clashes since Tuesday.

Thirteen “extremists” died in three days of battle, according to another spokesman for Haftar’s forces, Ali al-Thabet, but there was no independent confirmation of that toll.

The US envoy to Libya, Jonathan Winer, on Thursday issued a rare show of support for the forces of Haftar, a controversial and divisive figure in Libya.

Benghazi, birthplace of the 2011 revolution which toppled Libya’s longtime dictator Muammar Gaddafi, has been the scene of daily clashes for the past two years between Haftar’s forces and jihadist militias holding onto pockets of the city.