You are here: Home / Mediterranean / Haftar does not object to military operation in Libya 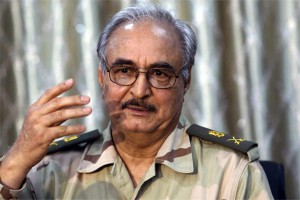 Commander of the Libyan government in Tabruk General Khalifa Haftar said on Friday that he does not object to a military operation in Libya, similar to the one carried out by the Saudi-led coalition in Yemen, Sky News Arabic reported.

In an interview with the network Haftar said that his forces do not want to cause damage and destruction in Tripoli but those who are currently deployed there will move at the appropriate time.

The general said that the movement of his units would take place after more pressure is put on the western parts of the country, stressing that his forces are moving slowly, but with “very-well calculated steps.” He emphasised however that the military capture of Tripoli must be carried out by forces under his command only.

General Haftar criticised the current UNSC sanctions on the supply of weapons to the Libyan army. He also criticised the EU’s efforts to secure a resolution to target illegal migrants in the Mediterranean. He said if Libya was supplied with weapons it would be able to end the flow of migrants to Europe.

Haftar claimed that armed groups supported by Turkey and Qatar were entering Libya while his forces do not have enough weapons to face these groups.

He also claimed that ISIS members had infiltrated into Libya from several neighbouring countries, as well as through the seaports along the Libyan coasts.