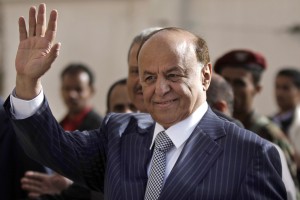 Yemeni President Abd Rabbuh Mansour Hadi told a Saudi-owned TV channel that he plans to return to Yemen, despite the fact that Houthis, who Hadi claims to be supported by Iran, were not fully defeated by international coalition airstrikes.

Yemeni President Abd Rabbuh Mansour Hadi, who has been forced to resign by Houthi rebels, told the Saudi-owned Al Arabiya TV channel that he plans to return to Yemen, despite the fact that Houthis, who Hadi claims to be supported by Iran, were not fully defeated by international coalition airstrikes.

Hadi said he was planning on returning to the southern port city of Aden and the capital Sanaa, adding that he had left Aden because of the highly dangerous conditions that emerged as a result of ongoing “aggression” on the part of Shiite Houthi rebels, with support from Iran.

Saudi Arabia and its Arab allies started launching airstrikes against Houthi rebels, the main opposition force in Yemen, at the end of March, following a request for military support from Hadi. Houthis had taken control of several Yemeni cities, including Sanaa.On Tuesday, the coalition announced that its Decisive Storm military operation was being terminated and would be replaced by the Restoring Hope campaign, which will focus on counter-terrorism efforts, humanitarian missions, and the revival of political dialogue in the crisis-hit country.

According to coalition spokesman, Saudi Brig. Gen. Ahmed Asiri, the Decisive Storm operation was terminated at the request of Hadi.

Houthis forced Hadi and the Yemeni government to resign in January, when the rebels took control of Sanaa. Hadi later withdrew his resignation after escaping from house arrest and fleeing to Aden. Hadi left Yemen for Saudi Arabia right after the start of coalition airstrikes.