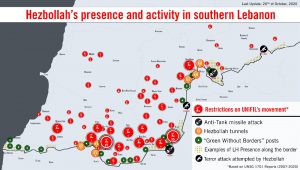 Hezbollah must be disarmed and the United Nations peace keepers must have access to Hezbollah tunnels along Lebanon’s border with Israel, Secretary-General Antonio Guterres said in a report discussed Thursday in a closed meeting at the United Nations Security Council in New York, like reported by jpost.com.

In the report Guterres said, “I call upon the Lebanese authorities to grant United Nations Interim Force in Lebanon (UNIFIL) full access to all locations north of the Blue Line requested in connection with the mission’s investigations, including with respect to the [Hezbollah] tunnels crossing the Blue Line.”

The Foreign Ministry on Thursday echoed Guterres’ call, noting on Twitter that “In 2018, Israel uncovered 6 terror tunnels, dug by #Hezbollah, crossing from #Lebanon into Israel. Hezbollah prevents UNIFIL inspectors access to these sites.”

But the issue was not just the ability to locate the attack tunnels, which had initially been discovered by Israel in 2018 and in 2019, Guterres said.
UNIFIL needs “freedom of movement” all along the blue line, that separates the two countries, and this included the independent ability to conduct patrols and other activities, he said.

Guterres also called for Hezbollah, an Iranian proxy militant and political group operating independently in Lebanon, to be disarmed.

“No progress was achieved with respect to the disarmament of armed groups. Hezbollah continued to acknowledge publicly that it maintains military capabilities,” Guterres said.

He pointed to a statement by Hezbollah Secretary-General Hassan Nasrallah, who said in December that his group had doubled the number of precision missiles aimed at Israel. Guterres added that Israel in November told the UNSC that Hezbollah had an arsenal of over 130,000 rockets, and military infrastructure.

The arms embargo against Hezbollah has not been effective, Guterres said, but added that the UN was “not in the position” to confirm allegations of arms transfers to Hezbollah.

The Lebanese government, he said, had not responded to his request for information on the matter.

UNIFIL is tasked with monitoring the 2006 ceasefire between Israel and Lebanon that ended the Second Lebanon War, as codified in UNSC Resolution 1701.
Guterres said that Resolution 1701 stated very clearly that weapons transfers to non-state actors in Lebanon was a violation of the agreement.

As the UNSC spoke, IDF Chief of Staff Lt.-Gen. Aviv Kohavi was on a diplomatic mission to Europe, along with President Reuven Rivlin to help garner support against Hezbollah.

“Security-wise, the State of Lebanon is a prisoner of the Hezbollah terrorist organization,” Kohavi said.

“Hezbollah today has thousands of rockets and missiles that are set up right in the middle of Lebanon’s civilian population, intent on destroying Israel’s citizens,” Kochavi continued, adding that the IDF is well prepared to prevent that from happening.

“We will not hesitate to attack, and attack strongly,” Kohavi said while in France, referring to the numerous IDF military targets in Lebanon. The trip also includes visits to Austria and Germany.

But Guterres, in his report, which covered the period from October 21 to February 19, did not just focus on Hezbollah and Lebanese violations. He also took issue with Israeli violations, including aerial drones and military planes, which fly over Lebanon en route to Syria to ensure that Iran doesn’t entrench itself there.

From October to February UNIFIL recorded 333 airspace violations, totaling 758 hours and 11 minutes in overnight time, Guterres said. Some 77% of the traffic was “unmanned aerial vehicles,” he added.

“The continued violations of Lebanese airspace by Israeli aircraft, including, allegedly, to carry out strikes inside the Syrian Arab Republic, as well as of low-flying aircraft and unmanned aerial vehicles, remains of deep concern,” Guterres said.

He also expressed concern about incidents in which the IDF and the Lebanese Armed Forces pointed weapons at each other across the blue line, creating tensions that were then diffused by UNIFIL.

Such incidents, he said, “have the potential to lead to escalation, with serious consequences.”