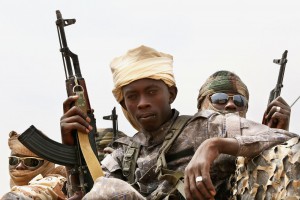 Most Americans first heard of the Nigerian terrorist group Boko Haram when the group kidnapped about 270 schoolgirls from Chibok two years ago. The raid captured the world’s attention and it sparked a social media campaign called #BringBackOurGirls, which drew support worldwide, including from First Lady Michelle Obama.

The Boko Haram insurgency is a lot more complicated than outside observers can imagine. Nigeria has been battling the Islamic terrorist group since 2002. They want to establish their own sovereign region in the northern part of the country, which has almost 180 million people with about 300 ethnic groups. The North is largely Muslim, while the South is predominantly Christian. The country has struggled with ethnic and religious tensions since it gained independence from the British in 1960.

Dr.Fait Muedini, a professor in the department of International Studies at Butler University is an expert on political Islamist movements. He believes their tactics, which target Muslims and Christians indiscriminately, have not won them many supporters.

“Many Muslims in Nigeria and throughout the world have spoken out against Boko Haram due to the crimes that they have committed against Muslims and non-Muslims alike,” said Muedini. “It is important to note that while Boko Haram attempts to claim that they are representing the ‘true Islam,’ the vast majority of the Muslims in Nigeria, and in the world have condemned the ideology and actions of groups such as Boko Haram, and the Islamic State in Iraq and the Levant. Many Muslims are speaking out against the group, arguing repeatedly that Islam should not be associated with the violence and intolerance portrayed by this organization.”

The Boko Haram insurgency should have been easily crushed by Nigeria’s large standing military, which has a defense budget of about $2.3 billion. But like many institutions in the country, the military is riddled with corruption. Former Defense Minister Bello Haliru Mohammed has been accused of laundering $1.5 million and some soldiers have been court martialed because they refused to fight against the terrorists, claiming poor equipment and not being paid.

When word of the kidnapping of the Chibok school girls became an international incident it also became an embarrassment for Nigeria’s President Goodluck Jonathan. Jonathan, a Christian from the South, faced widespread criticism for his failure to act on the situation, particularly since Boko Haram has begun using teenage female suicide bombers to target public venues such as marketplaces, churches and mosques. His inaction eventually cost him his job, as frustrated Nigerians voted to replace him with retired Gen.
Muhammadu Buhari, who briefly ruled the country in the 1980s.

Buhari, a career military man from the largely Muslim North, promised to quash the Boko Haram insurgency. Initially, they had some success, but Buhari drew widespread criticism when he declared the insurgency was “technically” over. But in fact, the terrorist group continues to kill Nigerians and there seems to be no end to the conflict not to mention, the Chibok school girls have still not been rescued.

Beverly Hills psychiatrist Dr. Carole Lieberman, M.D., author of “Coping With Terrorism: Dreams Interrupted,” a book on the psychological effects of terrorism, said it was a mistake for Buhari to claim victory so soon.

“It was self aggrandizing to claim he had won the battle against Boko Haram,” said Lieberman. “While these girls are still being held hostage and likely continuing to be raped and tortured, it is obscene for (President) Buhari to pretend that Boko Haram is not enjoying an ongoing victory.”

Abu Grema, a former captain in the Nigerian Army, now works as a security consultant, however believes Buhari’s controversial statement was largely accurate, saying the intense military offensive by Nigerian forces has reduced Boko Haram’s ability to take over towns.

“Even if he (Buhari) had managed to kill all of them, there is no end to terrorism,” said Lieberman. “There will be people to take their place. That is the problem with terrorism all over the world.”

“Buhari has taken a very strong military approach towards dealing with Boko Haram,” said Muedini. “Many writing on these issues have suggested that while this has been viewed as being effective, violence alone won’t stop the organization. In fact, we have just seen additional attacks by Boko Haram just recently.”

Lieberman said it was particularly troubling that Buhari declared victory, even though the Chibok school girls have not been rescued. Even if the girls return, they will need “years of psychotherapy” because of the abuse they have endured after being missing for nearly two years. Lieberman wonders if many of the girls had undergone brainwashing, which might explain why few of them have attempted to escape. And the ones fortunate enough to get back home will likely exhibit symptoms of Post-Traumatic Stress Disorder, anxiety, depression, nightmares and weight loss. They will also have abandonment issues. Since it took so long to rescue them, they will think that no one cared about their fate.

What remains to be true is that stopping the Boko Haram insurgency will take a multi-pronged approach from the government, including tackling corruption, poverty and other social problems. Many people joined the group because they think that an Islamic government would bring an end to the widespread financial mismanagement and economic inequality in Nigeria.

“In order to truly counter groups such as Boko Haram, there will need to be education about Islam, as well as government work on providing equal rights, employment, education rights, etc.,” said Muedini. “Some scholars have also written about the need to combat corruption, and if this happens, this would reduce the number of those moving towards groups such as Boko Haram.”