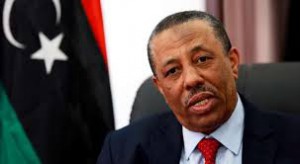 A spokesman for Libya’s internationally recognized government says gunmen tried to assassinate the prime minister on his way to the airport in the eastern city of Tobruk.

Arish Said, head of the government’s media department, said that Prime Minister Abdullah al-Thinni’s motorcade was attacked and one of his guards was lightly wounded Tuesday but that there were no fatalities.