You are here: Home / West Asia / Gunmen kill eight Afghan guards at largest US base 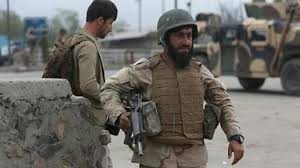 Gunmen have killed eight Afghan guards working at the largest American base in Afghanistan, officials said on Tuesday, as the US appears set to boost its troop presence in the country, like reported by gulfnews.com.

The guards were ambushed near Bagram base north of Kabul as they were driving home in convoy late Monday, said district governor Abdul Shakoor Quddusi.

“They were all local residents serving as guards at Bagram,” he said, adding that two other guards were wounded.

No group immediately claimed responsibility for the attack. The Taliban are stepping up nationwide attacks and the Daesh group are making inroads into the war-torn country.

Washington is soon expected to announce an increase in the US military deployment to bolster Afghan forces, who are struggling to contain the Taliban’s nationwide offensive. American military commanders in Afghanistan have requested thousands of extra boots on the ground.

US troops in Afghanistan now number about 8,400, and there are another 5,000 from Nato allies, a far cry from the US presence of more than 100,000 six years ago. They mainly serve as advisers and not on the front line.

Bagram, around 50 kilometres north of the Kabul, houses the largest contingent of US soldiers in the country.

Seven American soldiers were wounded on Saturday in an insider attack by an Afghan soldier at Camp Shaheen near the northern city of Mazar-i-Sharif.

Analysts say such attacks are expected to increase this year as US troops engage with the Afghan military to double the size of its special forces, considered to be effective in the fight against insurgents.

The Afghan conflict is the longest in American history, with US-led forces at war there since the Taliban regime was ousted in 2001.