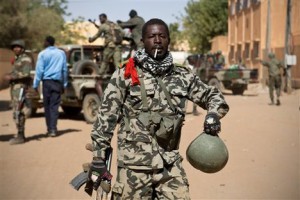 Mali’s defense ministry says three soldiers were killed and two seriously injured in an attack by unidentified gunmen near the central town of Boni.

A ministry statement said the “ambush” occurred Friday morning on the road linking Douentza and Gao in the central Mopti region.

Northern Mali fell under the control of Islamic extremists in 2012, prompting a French-led intervention that drove them from cities and towns.