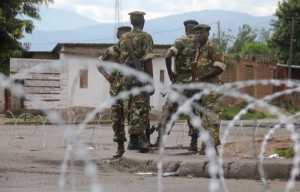 “It was yesterday (Monday) around 17:45 (15:45 GMT) when unidentified gunmen riding a motorcycle shot dead three persons with a pistol in a bar at the 6th Avenue in Bwiza, before riding away their motorcycle,” said Burundian Police Spokesman Pierre Nkurikiye.

According to him, the three victims include a police officer, a senior official at the Burundian education ministry and a chief of Gatete village in the country’s southern province of Rumonge.

Nkurikiye indicated that four persons as well as some other people working in the bar and some people who were taking drinks in the bar were arrested for further investigations.

He added that corpses of two men were discovered Tuesday morning at Rubirizi in palm trees in Mutimbuzi district in Bujumbura Rural province, some 12 km west of the Burundian capital Bujumbura, where they had been dumped by unidentified persons.

Nkurikiye stressed, “Investigations have been launched and we hope that it is possible to identify all phone numbers that rang the broker the day he disappeared from sight.”

He added that the suspect who exploded a grenade in Gatumba town in Bujumbura Rural province on Dec. 1, 2015, killing three persons and injuring seven others was arrested on Monday in a bar in Kinyinya in Gatumba town.

“The suspect admitted to have blasted the grenade,” said Nkurikiye.