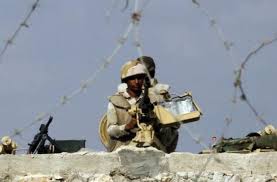 Only two hours after the Cairo Criminal Court sentenced Morsi and dozens of Muslim Brotherhood (MB) leaders and affiliates to death over jailbreak and espionage charges, a group of militants opened fire at a car carrying judges in Al-Arish City, killing three of them together with their driver.

Three other judges were critically injured in the attack.

Police rushed to the scene, cordoned off the area and started an investigation to identify the assailants.

No groups have claimed responsibility for the attack. However, analysts say it is more likely that the assault was carried out by the Sinai-based Ansar Bayt al-Maqdis, which has recently pledged allegiance to the Islamic State (IS) regional militant group.

Saturday’s attack raised fear that judges will be the new targets for militants who have been targeting army and policemen across the country.

This urged Egyptian President Abdel-Fattah al-Sisi to order security forces to provide protection for workers of the judicial system, according the State TV.

Military operations escalated notably in restive Sinai Peninsula after the ouster of Morsi by the army in response to mass protest against his one-year rule in 2013.

Anti-government attacks have extended lately to reach the capital Cairo and other provinces across the country.

The former president and 105 other defendants, most of whom are members of the Palestinian Hamas group, were sentenced to death over 2011 jailbreak in the case publicly known as the “Wadi al-Natron jailbreak.”

Morsi is accused of escaping prison with the assistance of domestic and foreign militants during the January 25 uprising that ousted Hosni Mubarak in 2011.

The verdict was referred to the Grand Mufti, the country’s highest Islamic official whose opinion is usually considered a formality.

The final verdict, which still can be appealed, will be issued on June 2.

Some 130 other defendants affiliated with the MB, Palestinian Hamas movement and the Lebanese Shiite Hezbollah group, also face trial in the same case.

They are all accused of breaking prisons, kidnapping and killing of police officers.

This verdict is the second against Morsi who was sentenced last month by the same court to 20 years in jail over ordering the arrest and torture of protesters in 2012.

Morsi is also facing charges of insulting the judiciary as well as delivering clandestine security and national information to Qatar, allegedly considered a supporter of the MB.

The defendants were accused of conspiring with foreign powers, including Hamas movement, Hezbollah group and Iran’s National Guard, to destabilize Egypt.

Right after announcing the verdicts, the pro-Morsi National Coalition to Support the Legitimacy urged for “a revolutionary wave that lasts until July 3,” the day on which Morsi was overthrown.

In a press release, The coalition said it fully rejects Morsi’s trial, stressing that activities will go on to free Morsi and topple the current regime.

The dissolved Freedom and Justice party, the MB’s political wing, rejected the verdict and described it as “void.”

The Egyptian judiciary is criticized by many international human rights organizations and local opposition groups of politicizing its rulings in favor of the current pro-army regime.

However, the government says it has no influence over Egypt’s justice system.

Many of the outlawed MB members and secular activists are in prison awaiting trials relating to inciting violence, conspiring with foreign powers to destabilize Egypt and killing protesters, some of which carry the death penalty.

Dozens of members, including the group’s leading figures, have been sentenced to death over violence charges.