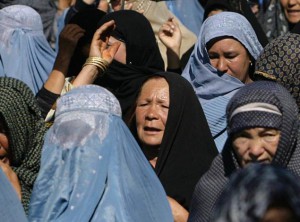 Tuesday’s kidnappings in the province of Ghazni follow a spate of suicide bombings in Kabul last week and add to fears of an increase in sectarian violence as the Taliban’s anti-government insurgency gathers pace.

The passengers were travelling to Ghazni city when the gunmen stopped their car in Jaghuri, officials said.

“We are currently in contact with local elders. They will speak with the kidnappers to free our Hazara people,” Mohammad Ali Ahmadi, a deputy governor of Ghazni, told Reuters.

Hazaras, an ethnic group belonging mainly to the Shi’ite branch of Islam, were persecuted under the Taliban’s hardline Sunni Islamist rule, although sectarian violence has been rare since the end of the Taliban rule in 2001.

On Sunday, suspected Taliban fighters, seeking to re-establish their hard-line Islamist regime after it was toppled by U.S.-led military intervention in 2001, kidnapped four Hazaras while they were travelling from the Jaghori district to Ghazni.

“The Taliban kidnapped them from a car in a same way and later security forces found their bodies,” Ahmadi said.

In February, masked gunmen kidnapped 30 Hazaras in the southern province of Zabul. Nineteen were freed in May, two were killed and nine are still missing.

Almost 5,000 civilians were killed or wounded in Afghanistan in the first half of the year, according to U.N. figures.