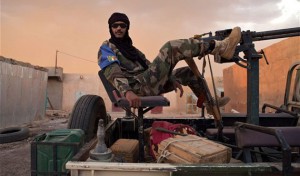 Unidentified gunmen freed 21 prisoners in the southern Mali town of Banamba late on Sunday in what Mali’s justice minister described as a “terrorist attack”.

Mamadou Ismael Konate said on Monday the six attackers had wanted to release “two terrorists” but said they had already been moved to another town. Konate said one prison guard had gone missing after the raid but he provided no further details.

An army spokesman said the attack had occurred around 2100 GMT on Sunday.

It was not immediately clear who was behind the attack but Islamist groups such as Ansar Dine have stepped up their insurgency in Mali this year, carrying out more than 60 attacks on United Nations and other targets since May and spreading south into areas previously deemed safe.

“I heard gunshots as I was getting ready to go to bed around 2300,” said Banamba resident Yacouba Doucoure. “Later I learned there was an attack against the army camp and the prison.”

The attack on the army camp could not be immediately verified by Reuters.

A soldier for the U.N. mission known as MINUSMA was killed in an attack on a convoy in the Mopti region of central Mali on Sunday, MINUSMA said in a statement.

Forces from former colonial power France drove them back a year later, but they have kept bases in remote desert locations.