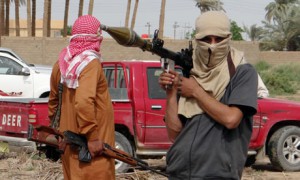 Gunmen shot and wounded the Italian manager of a logistics company in the southern Iraqi oil city of Basra on Sunday, security officials and a company source said.

Carlo Morandi from the Italian-Iraqi joint venture Sama Alimad was shot twice while withdrawing money from a bank and taken to hospital for surgery, but his injuries were not life-threatening, the officials said.

Basra police spokesman Colonel Kareem al-Zaidi called the incident “criminal, not terrorist”, and said Morandi had not been targeted as a foreigner.

Iraq’s southern regions, which produce some 90 percent of the country’s oil, are far from areas of conflict with Islamic State militants in the north and west, but officials have warned production could be affected by protests in the area – a sign of the growing challenges facing foreign firms operating there.

A promise from authorities to create new jobs helped clear protesters on Sunday. The protesters had set up tents in front of the southern Umm Qasr commodities port, blocking road access for two days.

Separate demonstrations in Basra and other cities including the capital Baghdad have called for basic government services and reforms to a system riddled for years with graft and mismanagement. Abadi has launched a campaign of major reforms partly in response to these protests.

Reuters could not immediately reach a spokesman for Sama Alimad, owned jointly by Italy’s Saima Avandero S.p.A. and Iraq’s Al-Imad Marine Services Ltd. Officials from the Italian foreign ministry and the embassy in Baghdad and were not immediately available.