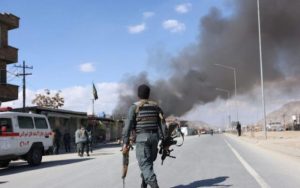 Gunfire has been heard after several explosions in the Afghan capital, Kabul, reportedly near the Iraqi embassy, police say.

The incident is said to have happened in the Shaw-e Naw neighbourhood in the north-west of the city.

Police confirmed to Afghan media that an explosion had taken place. However, details are unclear.

Kabul has seen a number of deadly attacks this year blamed on the Taliban or so-called Islamic State.