You are here: Home / West Asia / Gunfight continues at Indian Consulate in Afghanistan 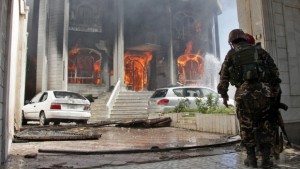 Gunshots continued to ring out Monday at the Indian consulate in Afghanistan’s Mazar-e-Sharif city that a group of armed men attacked a day before, an official said.

The attackers had taken up positions in a residential home located in front of the consulate and were firing from there, Xinhua quoted the official as saying.

Without commenting on possible casualties, the official said security forces had tightened the siege and were trying to capture or kill the assailants.

Meanwhile, a security official told Xinhua that four security personnel and three civilians have sustained injuries during the gunfight.

No Indian has suffered in the incident and all of them have been evacuated to a safer place, the official added.

The number of attackers, according to the official, could be between eight to 12, all armed with assault rifles and suicide vests.

Indian diplomatic missions in Afghanistan have come under militant attacks earlier too. In 2008 and 2009, the embassy in Kabul was attacked, leaving dozens dead.

In May 2014, gunmen attacked the Indian consulate in Herat, while in August 2013, nine civilians died when the consulate in Jalalabad was targeted.