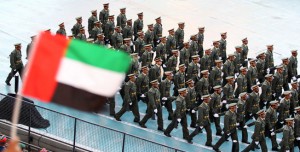 Gulf countries including Qatar, Bahrain, Saudi Arabia and the UAE have troops in Yemen.

Gulf Arab nations are expanding the ground war in Yemen, pouring more troops into the country to defeat Houthi rebels they say are backed by regional rival Iran.

About 1,000 troops from Qatar entered the country on Sunday from the Wadia post on Saudi Arabia’s border with Yemen, the Qatari-owned Al Jazeera television reported. The soldiers, backed by armored vehicles, missiles and missile launchers, were headed to the oil-rich central Marib province, Al Jazeera said, citing its corresponding at the border.

The reinforcements arrived after 45 troops from the United Arab Emirates and 10 Saudi soldiers were killed in Marib on 4 September in the worst setback for the coalition since the Saudi- led military campaign started in March. Bahrain, another member of the coalition, said five of its soldiers were also killed defending Saudi Arabia’s southern border.

Expanding the ground war carries a “huge risk of heavy casualties” for the Gulf Arab monarchies, according to Ibrahim Fraihat, senior political analyst at Brookings Doha Center. “Yemen has historically proved to be a very tough spot for foreign armies to fight and win.”

Mounting losses will test the will of the Sunni-ruled Gulf states to extend their campaign after helping the internationally recognized government retake parts of southern Yemen. The coalition started bombing Yemen in March in an attempt to restore President Abdurabuh Mansur Hadi to power after the Houthis seized Sana’a, prompting him to flee.

Western diplomats and analysts have expressed skepticism about the level of Iranian involvement in Yemen’s conflict. The rebels, known as the Houthis, say they have suffered from discrimination by successive Yemeni governments.

Coalition officials have said they aim to move north to retake Sana’a from the Houthis, who are backed by former Yemeni President Ali Abdullah Saleh. To move on the capital, they need to recapture Marib first, said Fraihat.

“Marib is quite dangerous, it’s in the center of Yemen,” he said by phone.