You are here: Home / MidEastGulf / Gulf States: a burning priority for ISIL? 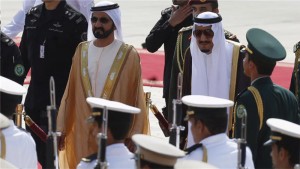 While recent spectacular terror attacks either directed or inspired by the Islamic State of Iraq and the Levant (ISIL) have mostly taken place against the West and Russia, a new priority for ISIL could be the Gulf.

The two countries that appear to be more at risk now are Saudi Arabia and the United Arab Emirates (UAE). The audio statement last night from ISIL leader Abu Bakr al-Baghdadi, after seven months of silence, calling for an upheaval in Saudi Arabia against the regime is proof of that. This follows a December 4 video in which both countries were singled out as enemies because of their military campaign in Yemen.

Also the UAE was the first country to say in November that it was ready to send ground troops to Syria to fight off ISIL, and this was followed by the Saudi announcement of a large anti-ISIL coalition.

The likelihood of a full-blown ground operation by troops from that newly formed coalition is at the moment quite low, as it would mean Saudi soldiers fighting alongside its arch-enemies – the Shia militias – against ISIL.

Furthermore, both Saudi Arabia and the UAE’s priorities are in Yemen. The fact that the latter is allegedly using mercenaries from mostly Colombia in Yemen also makes the involvement of ground troops in Syria and Iraq less likely.

This assessment might change instantaneously if there were to be a spectacular ISIL-directed terror attack in either Saudi Arabia or the UAE.

This scenario is self-evident as the November Paris attacks triggered the United Kingdom to strike ISIL in Syria. And France had started its air campaign in September – something they had refused to do until then.

For the UAE, another country of significant importance is Libya. To understand this, it’s enough to look at the August 2014 and February 2015 air strikes that the UAE conducted with Egypt in Libya – without the knowledge of the United States.

Now that ISIL has been expanding its territory and presence in Libya, particularly around Sirte, it is not far-fetched to see the UAE becoming more of a target for ISIL if it continues air strikes in the North African country.

Moreover, the UAE domestic security forces have proven to be excellent thwarters: In August the UAE dismantled an Islamist cell of 41 people, both Emiratis and foreigners, that planned to overthrow the regime and install an Islamic caliphate.

As the facts are on the ground, ISIL has the potential to pull off a multi-pronged Paris-style attack perpetrated by terrorists from abroad – pictures of the Paris terrorists were featured in one of the recent ISIL videos threatening Saudi Arabia.

The threat against the UAE and Saudi Arabia could also be homegrown terrorism involving less sophisticated attacks using cars or knives as weapons. As in the case of the Sousse beach attack in Tunisia, the goal would be to damage the UAE tourism industry, scare off expats and investors.

For that Dubai is the ideal target because it represents everything the jihadists hate, and its huge number of international tourists and Western expats make it doubly attractive. What is actually surprising is that the UAE has become a top target country for the ISIL only now.

Like for al-Qaeda before, the big prize for ISIL is certainly Saudi Arabia. In October 2014, ISIL’s rationale about attacking what it called the “apostate” Saudi regime was that it was reaching out to Iran, selling out Sunnis in Iraq and bailing out Egyptian President Abdel Fattah el-Sisi. While the last allegation is true, the first two were false.

Meanwhile, Saudi authorities arrested ISIL followers that plotted against various targets, including the US embassy in Riyadh.

Also since April, Saudi domestic security forces have been concerned with potential terror attacks on malls and on Aramco oil facilities. In July, Riyadh was targeted when an ISIL operative or follower blew himself up at a checkpoint near the Al Hayer prison.

Then in August a mosque attended mostly by Saudi security forces was targeted by ISIL in Abha, close to the Yemeni border, leaving 15 people dead. Following that incident, in October a Syrian man and a Filipina were arrested in Riyadh for allegedly preparing suicide attacks.

Since then and the Saudi announcement of the anti-ISIL coalition, numerous ISIL videos came out in the following 72 hours threatening the kingdom directly.

While some previous ISIL attacks had targeted the Shia community inside the kingdom, the most recent threats make clear that the regime itself will most likely be targeted.

In one of the recent longer videos, ISIL attacks the ulema, the princes’ “immoral” way of life, the Saudi banks and the supposed kindness to the Shia minority, among other things.

Even though ISIL has made no secret that it wanted to unseat the Gulf ruling dynasties, the recent call for attacks does not bode well for Saudi Arabia or the UAE.

Sadly, recent terror history shows that ISIL operatives and followers will stop at nothing in striking countries they have in their sight.