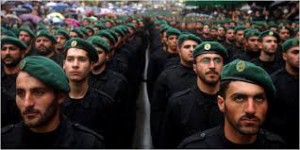 A Saudi-led bloc of six Gulf Arab nations formally branded Hezbollah a terrorist organization on Wednesday, ramping up the pressure on the Lebanese militant group fighting on the side of President Bashar Assad in Syria.

The move by the Gulf Co-operation Council comes less than two weeks after Saudi Arabia announced it was cutting $4 billion in aid to Lebanese security forces. The kingdom and other Gulf states followed up that move by urging its citizens to leave Lebanon, dealing a blow to the tiny nation’s tourism industry.

A statement from GCC Secretary-General Abdulatif al-Zayani said the bloc decided to implement the terrorist designation because of hostile acts by Hezbollah within its member states. It said the designation applies to the militant group as well as all its leaders, factions and affiliates.

Al-Zayani accused Hezbollah of charges including seeking to recruit members within the GCC to carry out terrorist acts, smuggling weapons and explosives, and incitement to sow disorder and violence.

Those activities within GCC member states and in Syria, Yemen and Iraq “are incompatible with the values and moral and humanitarian principles and international law, and pose a threat to Arab national security,” he said.

Lebanon’s main political divide pits a Sunni-led coalition against another led by the Shiite Hezbollah movement, which includes both political and military wings. The Mediterranean country has weathered a string of militant attacks in recent years linked to the war in neighbouring Syria.

The GCC’s designation brings it in line with the United States, which is closely allied with the Gulf states and has long considered Hezbollah to be a terrorist organization. The European Union only lists the military wing of Hezbollah on its terrorist blacklist.

Saudi Arabia in 2014 designated a Saudi affiliate of Hezbollah a terrorist group along with the Muslim Brotherhood, al-Qaida, Yemen’s Shiite Houthis and other groups. The Emirates previously labeled regional Hezbollah affiliates with similar designations.

The GCC announcement came a few hours after a televised speech by Hezbollah leader Sayyed Hassan Nasrallah in which he harshly criticized Saudi Arabia for punitive measures that targeted Lebanon recently, including the halt in aid and Gulf travel warnings.

He repeated his accusations that Saudi Arabia was directly responsible for some of the car bombings in Lebanon, Syria and Iraq and denounced Saudi “massacres” in Yemen.

“Who gives Saudi Arabia the right to punish Lebanon and its army and Lebanese people living in Saudi Arabia and the Gulf just because Hezbollah is speaking out? We urge Riyadh to settle accounts with Hezbollah and not all the Lebanese,” he said.

He also accused Saudi Arabia of seeking to cause strife between Sunnis and Shiites everywhere in the world and said its execution of al-Nimr in January came in that context.