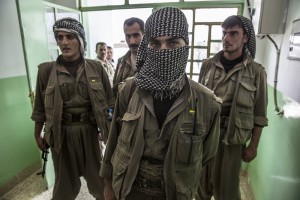 They are the first sign that at least a few residents of Mosul, an Iraqi city captured by IS last summer, are hitting back.

The city is Iraq’s second largest and is home to two million people. The majority of the population, like their Islamist overloads, are members of the Sunni Muslim tradition.

A brutal campaign snuffed out tribal resistance to IS in southern Syria late last year.

But the new group inside Iraqi territory is intent on reminding the outside world that Sunnis and others from the city are trying to keep the death cult off balance.

The guerrillas’ identities are a secret. Their faces are masked as they snatch an IS official off the street and force him into a car at gunpoint.

He is taken to a safe house where he is shoved, kicked and interrogated. The official remains defiant, saying: “They are stronger than you.”

Sources said the man was then shot dead.

In another video the group burns an IS house just as the call to dawn prayers echoes across the city.

In a third, an IS gunman is seen guarding a building and looking away from the camera, which is next to a fighter with an AK-47 rifle.

Shots ring out and the gunman squats to take cover. More shots follow and he is killed or badly injured.

The Kurdistan-based coordinator of the secret cells operating in Mosul said: “At first they were only formed into small groups but now they have been doing daily operations.

“They have become the ghosts which frighten Daesh (IS) and threaten Daesh in the city.

“Of course we target specific people – leaders who have influence within Daesh and their leaders inside the city. We know who is who and who to target.”

They arm themselves with weapons and ammunition they buy on the black market.

They are believed to be targeting foreign fighters as a priority – following reports of tensions within the ranks of IS between outsiders and local fighters – possibly over wide pay differences.

Atheel Nujaifi, the deposed former governor of Mosul, said he believed that recapturing the city would “not be too difficult” because “we believe there are only about 3,000 IS fighters there”.

This optimism comes in the face of apathy among many Sunnis in the city who, he said, would rise up only when they had assurances from the Baghdad government that Shia militia would be kept away.

“The resistance is important because it shows others that we are prepared to get rid of IS.

“The moment we get a clear deal from Baghdad we will rise up.”